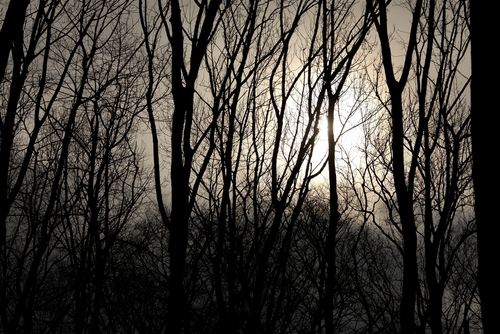 It was described as a never-ending winter, it caused famine, and the sun would not shine. Could it happen again? (Shutterstock*)
Good to Know

Historical writings from all over the world in the 530s A.D. describe a veil that shrouded the Earth and cut it off from the warmth and light of the sun. While multiple theories on the exact cause of this event have been proposed, new evidence points to an unusually close passing of Halley’s Comet.

Dallas Abbott, a geologist at Columbia University, and a team of researchers have been studying ice cores from Greenland. In the parts of ice dating from around 536, they found unusually high amounts of nickel and tin, substances that suggest space debris, explains a New Scientist article published Monday.

“We know that Halley’s comet came by Earth in 530,” Abbott told New Scientist. “And the Chinese record indicates it was unusually bright.”

If Halley’s comet passed especially close to the sun at that time, the sun may have melted off more of the comet’s ice than usual, scattering more debris—debris so thick it covered the Earth for years.

Scientists have in the past speculated that comet debris could be the cause. Another theory holds that a supervolcano could have erupted, covering the earth in ash, though the length of impact would have been extraordinary.

Could it happen again?

About every 10,000 years, asteroids larger than 300 feet could hit the Earth, according to NASA, causing tidal waves and local disasters. Every several hundred thousand years, asteroids about a half-mile wide could cause great global disasters, spreading debris that could partially block sunlight, cause severe acid rain, and fire storms.

Effects the Weather Had on 530s Society

Science writer and former archaeologist K. Kris Hirst sums up some of the devastation experienced throughout the world during that time, in an article for About.com:

1. The Justinian smallpox plague killed as much as a third of Europe’s population.

2. Famine killed 80 percent of the people in some regions of China.

3. Losses may have been heaviest in Scandinavia, and this event may have caused the Viking diaspora.

What People Wrote About It Back Then

Michael the Syrian: “The sun became dark and its darkness lasted for one and a half years… Each day it shone for about four hours and still this light was only a feeble shadow…the fruits did not ripen and the wine tasted like sour grapes.”

Prokopios, living in in Africa and Italy, said: “For the sun gave forth its light without brightness, like the moon, during this whole year, and it seemed exceedingly like the sun in eclipse, for the beams it shed were not clear nor such as it is accustomed to shed.”

An anonymous Syriac chronicler wrote: “…The sun began to be darkened by day and the moon by night, while ocean was tumultuous with spray, from the 24th of March in this year till the 24th of June in the following year…” and the following winter in Mesopotamia was so bad that “from the large and unwonted quantity of snow the birds perished.”

Cassiodorus, praetorian prefect of Italy at the time, wrote: “So we have had a winter without storms, spring without mildness, summer without heat.”
John Lydos in Constantinople, wrote in “On Portents”: “If the sun becomes dim because the air is dense from rising moisture—as happened in [536/537] for nearly a whole year…so that produce was destroyed because of the bad time—it predicts heavy trouble in Europe.”

In the 1980s, Michael R. Rampino and Richard B. Strothers identified widespread historical accounts of this extreme weather period. The above quotes were compiled by Rampino and Strothers and cited by Hirst.

*Image of trees in winter via Shutterstock