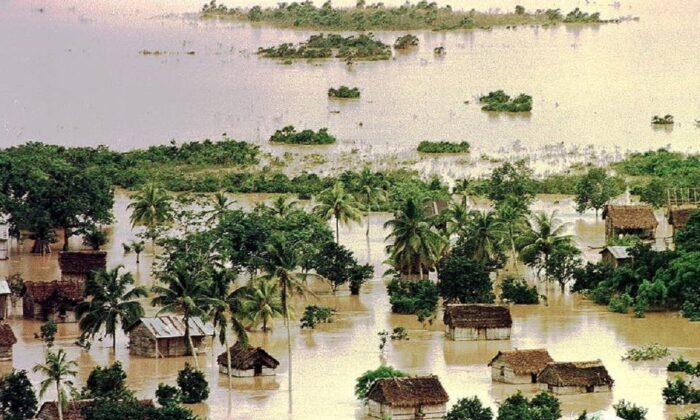 A settlement remain flooded by flood waters from the after the Segovia River after the passage of Hurricane Mitch, in the La Mosquitia province, northeast Honduras, on Nov. 3, 1998. (Orlando Sierra/AFP via Getty Images)
International

AccuWeather meteorologists said on Tuesday that a tropical depression, the windy cyclone that sets the stage for a hurricane, could form in just a matter of days, far off Florida’s Gulf Coast.

This tropical depression kicks off the 2022 hurricane season which begins on June 1 and ends on Nov. 30.

The exhausting 182 days see an average of 10.1 named storms—Alex and Fiona are two possibilities this year—with an average of six of the 10 becoming hurricanes.

Hurricanes are Rated by Strength

While the greater number of tragic hurricanes have not landed in the U.S., the country has seen its fair share of destruction caused by the mighty storms such as Hurricane Katrina in 2005, which caused roughly $150 billion in damages and an estimated 1,800 deaths, and Hurricane Maria in 2017, which claimed at least 2,982 lives.

Most of the worst hurricanes in history were before any of our time, having taken place anywhere between 1775 and 1900, though a few on this list are in recent memory; check it out.

San Felipe Segundo was the third deadliest hurricane in the U.S., having killed an estimated 2,500 people in the Lake Okeechobee, Florida area. The storm affected Peurto Rico, Guadeloupe, the Turks, and Martinique.

The storm caused $100 million in damages; today that would be $1.5 billion.

Also known as the 1899 Puerto Rico Hurricane, it is the longest-running Atlantic storm on record, having lasted a total of 27 days (from a tropical depression to a hurricane). The storm peaked at Category 4 with winds of 150 mph before making landfall in Guayama, Puerto Rico where it killed 3,369 people and left 250,000 people without food or shelter.

The storm caused $20 million in damages; today that would be $69.6 million.

At the start of the American War of Independence, this Category 4 hurricane, also known as the Independence Hurricane, touched all 13 colonies and the colony of Newfoundland, claiming an estimated 4,000 lives.

According to Wikipedia, there is disagreement among historians and meteorologists about whether the events were one storm or two distinct storms.

Unfortunately, not much is known about this storm due to poor record-keeping. The storm hit Guadeloupe and some days later, made landfall in Louisiana.

The storm is also thought to have capsized around 60 percent of a huge convoy of French and Dutch merchant ships en route to Europe.

After spending days developing itself in the Intertropical Convergence Zone, Hurricane Flora made landfall in Haiti near peak intensity where it killed an estimated 5,000 people, and 3,000 others in various regions.

Reaching winds of 155 mph, the 1930 Dominican Republic hurricane was small, but mighty according to Wikipedia.

The storm struck the capital city of Santo Domingo where three districts of the city were almost completely destroyed, leaving thousands without shelter or water. The American Red Cross sent $15,000 ($240,000 in 2022) in aid the day after the hurricane made landfall.

The first billion-dollar hurricane to not touch the U.S., Hurricane Fifi, later known as Hurricane Orlene, killed between 8,000 and 10,000 people in the Central American country of Honduras.

The storm killed between 2,000 and 5,000 people overnight due to a massive flood, and the name Fifi was retired from the list of Atlantic hurricane names due to the extreme loss of life.

Killing around 7,000 people in Honduras, Hurricane Mitch was the deadliest hurricane in Central American history. At the time, the president of Honduras said the storm set the country back 50 years of economic development. The storm left around 20 percent of the country’s population homeless.

The Galveston Hurricane, often called the Galveston Flood, was the greatest natural disaster in U.S. history, killing between 6,000 and 12,000 people. The majority of the casualties occurred around Galveston, Texas, after a storm surge overwhelmed the shore with eight to 12 feet of water, destroying 7,000 buildings.

After the disaster, the “Golden Era of Galveston” came to an end, causing investors to flee to Houston.

The hurricane killed 22,000 to 27,501 people, making it the deadliest hurricane in the recorded history of the Atlantic hurricane basin.

The Emtage family, formerly known as Emptage, keeps a robust family parish records in St. Thomas, Barbados, and the marriage register in 1780 said:
“… a dreadful hurricane which began to rage with great fury at noon and continue with great violence till four o’clock the next morning, the 11th; At eight o’clock at night, St Thomas’s parsonage was demolished and the church where the Rector and his family sought shelter began to fall about two hours after, the Chancel fell while the family were in the church … St. Thomas’s Chapel, St. Michael’s, St. George’s, Christ Church’s and St. Lucy’s churches were totally destroyed, the other churches were severely ‘injured’ (except St. Peter’s and St. Philip’s). Because of the demolition of the parish church and chapel ‘divine services’ continued in the ‘boiling house’ at the ‘Rock Hall’ estate of Thomas Harper by Rev Wm Duke and curate Hugh Austin of St Thomas. Most other buildings and works were blown down and many lives were lost. The dead could not be brought to a church so were buried in gardens and private land.”