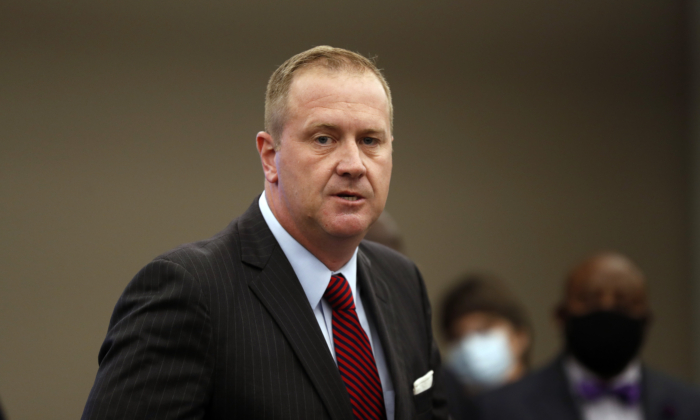 A federal court has blocked, for now, the administration’s private employer vaccine mandate, although a stricter one focused on health care workers remains in place.

The health care worker mandate, which covers more than 17 million nurses and others, doesn’t include a testing opt-out.

The coalition says the mandate is unlawful under federal law in part because the federal government is trying to wrest away compulsory vaccination power that has “always been the province of—and still properly belongs to—the states.”

“Vaccination requirements are matters that depends on local factors and conditions. Whatever might make sense in New York City, St Louis, or Omaha could be decidedly counterproductive and harmful in rural communities like Memphis, Missouri or McCook, Nebraska,” the 58-page filing in federal court in Missouri states.

“Federalism allows states to tailor such matters in the best interests of their communities. The heavy hand of CMS’s nationwide mandate does not. This court should thus set aside that rule as unlawful agency action under the Administrative Procedure Act.”

The mandate is poised to exacerbate an already “alarming shortage” of health care workers, the coalition said. As proof, they cite Dr. Randy Tobler, the CEO of Scotland County Hospital in Memphis, Missouri. He said that people working in his hospital told him that if the mandate takes effect, they won’t work there.

The Centers for Medicare & Medicaid Service (CMS), the agency that issued the rule, and the White House didn’t immediately return requests for comment on the lawsuit.

The Biden administration asserts that the mandate will curb the transmission and spread of COVID-19, the disease caused by the CCP virus. The rule acknowledges that many health care workers have recovered from COVID-19 and have some level of immunity as a result. But, citing a Centers for Disease Control and Prevention (CDC) study that was challenged by some scientists, CMS says natural immunity isn’t allowed as an alternative to vaccination.

CDC officials have acknowledged natural immunity exists but say even those with it can benefit from vaccination. A number of health experts share the view, but a host of others say vaccination isn’t necessary among the recovered.

CMS officials say the agency has the legal authority to issue a vaccine mandate through several sections of the Social Security Act, though the rule notes that CMS has never required vaccinations before.

Health care facilities that don’t comply with the mandate face a series of penalties, including fines. They could be ousted from Medicare and Medicaid programs, a senior administration official told reporters on a call last week.

One official later explained why there’s not a testing opt-out, a major difference between the rule and the private employer mandate.

“We have a higher bar for health care workers, given their critical role in ensuring the health and safety of their patients,” the official said. “And so it’s either vaccination or an exemption under the rules outlined.”