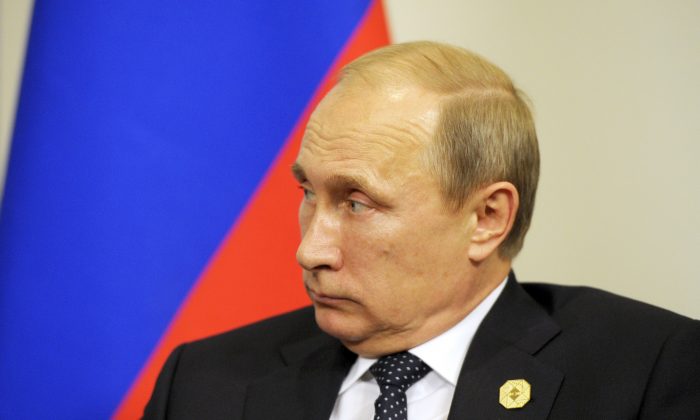 Russia's President Vladimir Putin looks over at the French president during their bilateral meeting on the sidelines of the G20 Summit in Brisbane, Australia, Saturday, Nov. 15, 2014. (AP Photo/Alain Jocard, Pool)
Europe

A confluence of forces have besieged the former communist country, creating a perfect economic storm. The ruble is tumbling at an alarming rate, but that’s not all, here are some of the factors.

Years of political corruption in Ukraine eventually led to the ‘Revolution of Dignity’ in February 2014, ousting the corrupt president Viktor Yanukovych, who fled his lavish mansion and asked for refuge from Putin. Russia then seized parts of Ukraine and launched a covert invasion into Ukraine. Obama issued three executive orders that imposed economic sanctions on Russia. A move that has been echoed by almost all of Western Europe.

Putin has been buying up most of the gold the mines in his country have been producing. This is partially due to sanctions imposed by Western countries making foreign buyers allergic to Russian mined gold. There is speculation of Russia backing its currency with gold, a move many believe the northern country is capable of. The currency could be used for trade across borders, a function the U.S. dollar fills in almost all international transactions around the globe. Two other leaders postulated such a dump-the-dollar-for-gold plan—Saddam and Gaddafi. Some argue this move was the final straw that led to military invasion of their respective countries.

President Putin recently started subsidizing the most famous Slavic beverage, Vodka. With the ruble loosing so much value so quickly, the cost of vodka would of course tend to rise. The central government is nipping this in the bud with direct intervention, saying increased prices would lead to more bootlegged varieties of alcohol being consumed. A populace that is forced to sober up due to badly played geopolitics, is likely to be very unhappy.

In an attempt to bolster the falling ruble, Russia sold almost $16 billion worth of reserves during the 3rd week of December. This was the biggest drop of reserves in 5 years. The value of the ruble against the dollar spiked, only to quickly lose a lot of the gained ground. In Russia, many workers immediately exchange their paychecks for U.S. dollars, a practice that hurts the value of the ruble. By temporarily inflating the value of the ruble, it discourages currency exchange of this sort. Russia’s central bank has gone through over $100 billion this year, leaving less than $400 billion in reserves.

Over half, 52 percent, of the central government’s budget comes from the sale of oil and natural gas. The price per barrel has fallen by over 40 percent since March, when Russia began its annexation and covert invasion of Ukraine, causing the West to respond with sanctions. With their cash cow drying up, and oil futures extremely uncertain, this has only increased the likelihood of a serious recession, as even a covert war is extremely expensive.

In another desperate attempt to slow the spiral towards economic collapse, the central bank raised interest rates from 10.5 percent to 17 percent. “The key rate was raised in order to stabilize the situation on the currency market. … That period has already, in our opinion, passed. The ruble is now strengthening,” Finance Minister Anton Siluanov told the upper house of parliament on Thursday. Many analysts are quick to counter the Finance Minister’s comments pointing to the many gaping holes in the largest country’s economy.

All of the aforementioned factors are compounding the reality that Russia is not a safe place for foreign investment. Without foreign investment coupled with the inability to access loans from Western banks due to sanctions, economic prospects are hampered. Russia is facing a potential downgrade of its credit rating to below investment grade by global credit agencies, if it can’t get its act together in the next 90 days.

The rate of annual inflation is 10.4 percent, but could be as high as 11 percent by the end of next month, said Andrei Belousov, Putin’s economic aide. This inflation is going to hit the poor the hardest as food prices are expected to jump by 10% next year.

In response to the Western sanctions, Putin immediately banned the import of many Western made goods as retaliation. This has led to certain common goods, like beef and fish, seeing up to a 50 percent increase in prices in just a few months. Once again, this affects the poor the most.