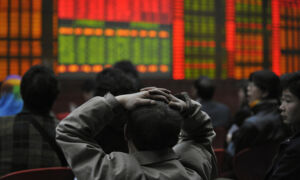 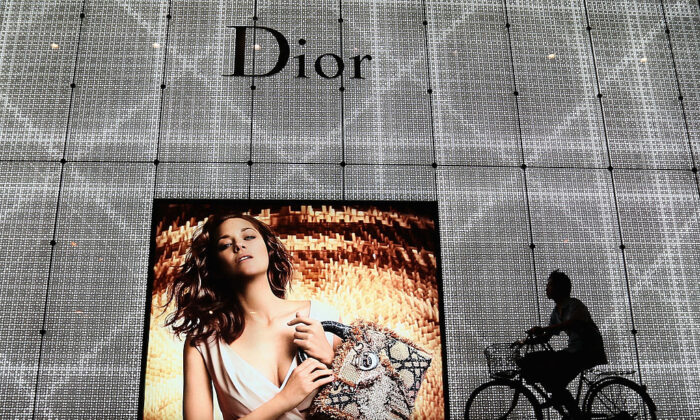 A Chinese man rides a bicycle past an advertisement for the Christian Dior store in Beijing on June 8, 2012. (Feng Li/Getty Images)
Thinking About China

International companies often encounter various traps when investing in China, and many have suffered from a total loss of personnel and money.

Yu Youjun, the former executive vice-governor of Hunan Province, described the phenomenon of Chinese officials attracting foreign investors into China. Yu was quoted as saying, “You are the boss, he’ll do whatever you say like a subordinate before you invest in China. He is your true companion when you need a friend while you visit China. He is your worst nightmare after your money is in China.” Yu’s quote accurately reflects the true state of foreign investment in the communist regime.

My years of experience and observation of the Chinese market and its atmosphere have taught me a few things. The following are the 10 traps the regime uses to encircle foreign investors.

In August 1993, the Central Organization Department of the CCP issued a report on further strengthening Party work in foreign firms. Beijing proposed that “all foreign ventures with more than three full Party members should establish Party organizations in accordance with the provisions of the Party constitution.”

According to a report published on October 2020 by Beijing’s mouthpiece People’s Daily, the purpose of Party branches within the private industry is to inject the “red gene” and integrate the communist building work into the entire development process of the entity.

In fact, with the setup of the Party branch and the stationing of communist officials inside the entity as party secretary, company board advisers, and other positions, the company will be controlled and eventually engulfed by the CCP.

The Consequences of Transitioning Officials

Under the CCP’s system, new officials often ignore and negate decisions made by their predecessors, which can have dire consequences for investors.

In 2013 when a large number of online companies emerged in China under the promotion of the CCP, a U.S. listed company cooperated with a local government in Henan Province to build the headquarters of a home furnishing business. After the company invested nearly 300 million yuan ($45.68 million), a new municipal party committee secretary took office and determined that the former secretary’s decision was wrong. As a result, the Chinese official immediately abolished the cooperation agreement with the company, leading to the direct bankruptcy of the project. After the incident, all losses were absorbed by the company. Cases such as this are not uncommon in China.

There are many cases of land grabs and forced demolitions carried out by local governments in China.

In 2015, a Chinese Canadian bought thousands of acres of industrial land in Tianjin to build a logistics park. After starting the construction, a local real estate developer became interested in the property. In order to sell the land at a good price (commercial land is at least 10 times more expensive than industrial land), the local government forcibly suspended the construction of the logistics park project.

After the incident, the local government only refunded the original price of the land to the investor and ignored all other losses. The investor lost more than 50 million yuan ($7.6 million). In addition, the local court would not even accept the investor’s lawsuit for a breach of contract by the government.

It’s an open secret that China’s GDP figures are falsified. In order to accomplish the projected annual growth rate, local governments often require businesses to report fake data. For example, if a company’s actual sales volume was 100 million yuan that year, the government may demand the company report 200 million yuan or 300 million yuan, or even more, in filing industrial output value declaration forms with signatures and company stamps.

This obviously imposes legal risks when it comes to filing taxes. The declaration forms become the strongest evidence for tax evasion in the event the company is placed under investigation by authorities.

In the CCP, coercion happens all too often. For example, in March 2017, South Korea angered the Chinese regime when it agreed to install the U.S. THAAD anti-missile system. In retaliation, the CCP’s media incited the public to boycott South Korean conglomerate Lotte Corporation. Lotte became the target of law enforcement agencies and its stores were fined by local governments. Its official Chinese website was also hacked and paralyzed. All 112 Lotte Mart’s stores in China were closed, and they were later forced to withdraw from China.

The latest example is the H&M boycott. The company issued a statement of due diligence in October 2020 to ban cotton sourced from Xinjiang due to forced labor in regional camps and factories, following the practice of the cotton trade body, Better Cotton Initiative (BCI).

There’s no doubt that foreign entities are often the victims of the CCP’s coercion diplomacy—a risk the investors have to face alone.

In September 2020, the General Office of the CCP’s Central Committee issued the “Opinion on Strengthening the United Front Work of the Private Economy in the New Era.” It called on the UFWDs to increase the CCP’s ideological work and influence in the private sector by targeting certain individuals such as business leaders, the major shareholders of private enterprises, the main leaders of social organizations in the industrial and commercial fields, and investors from Hong Kong and Macau.

If foreign investors comply with the regime’s united front work, they are enabling the CCP to harm the world.

In the communist world, business owners seek support and protection from powerful officials—they are referred to as “kao shan” in Chinese, which means “a mountain that can be relied on.” The bigger the business, the bigger “the mountain.”

However, shady business dealings could get both parties into trouble. For instance, if the official is placed under investigation for corruption such as bribery, a large number of investors who paid bribes would also be implicated. Such cases are very common in China.

China’s State Security Law went into effect on Feb. 22, 1993, which authorizes the CCP’s state security organs to exercise power in investigations, detentions, and arrests. In carrying out an investigation, security organs have the right to enter restricted areas and sites and to inspect the electronic communication instruments belonging to any organization or individual.

Since the law was implemented, investors from Hong Kong, Taiwan, and other foreign countries are under surveillance–emails, social media accounts, and overseas communication apps are monitored. There is no security for foreign investors as their personal and business secrets will be exposed to the CCP.

On Nov. 23, 2017, the CCP’s State Council rolled out regulations on integrating the Chinese military with science, technology, and private enterprises, which the regime called “military-civil fusion.” The goal is to strengthen China’s military by developing advanced technology and recruiting scientific talent. Private enterprises that refuse to support the Chinese military encounter endless troubles.

Forced technology transfer was one of the major factors in triggering a trade war between the United States and China.

Of the $500 billion or more in global imports of counterfeit and pirated goods in 2016, half came from China, according to estimates in the March report by the Organization for Economic Co-operation and Development.

In short, the biggest risk of investing in China does not come from normal market competition, but from the CCP. The laws only protect the CCP’s autocratic rule, not the foreign investors.