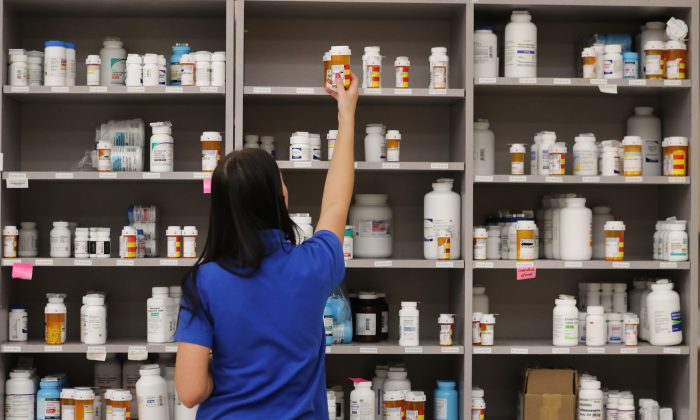 A pharmacy technician grabs a bottle of drugs off a shelve at the central pharmacy of Intermountain Heathcare in Midvale, Utah, on Sept. 10, 2018. (George Frey/Getty Images)
US News

One in four older Americans who use prescribed drugs such as Xanax for sleep issues and depression end up becoming addicted, according to a new study.

Benzodiazepines, a class of sedative that comes in the form of drugs like Valium or Xanax are meant to calm anxiety, improve sleep, or quell depression. But the study, compiled by researchers from the University of Michigan (UM), found patients ran a “high risk” of becoming drug-dependent and some never stop using the medications.

The findings come despite warnings against the long-term use of benzodiazepines, especially among older people. Usage can potentially raise the risk of car crashes, falls, broken hips, and other harmful side effects.

The study, published on Sept. 10, in the JAMA Internal Medicine journal, looked at benzodiazepine use by low-income older adults in a Pennsylvania program that aids with drug costs. Researchers studied 576 adults—78 years old on average—who received their first benzodiazepine prescription between 2008 to 2016. Of those, 152 (26 percent) still had a current or recent prescription one year later.

The study found that for every 10 additional days of prescribed medication, the patient’s risk for long-term usage nearly doubled over the next year.

Lauren Gerlach, the lead author of the study and a geriatric psychiatrist at UM, said stricter prescribing rules and alternative treatments need to take place.

“This shows that we need to help providers start with the end in mind when prescribing a benzodiazepine, by beginning with a short-duration prescription, and engage patients in discussions of when to reevaluate their symptoms and begin tapering the patient off,” she said in a statement.“We also need to educate providers about effective non-pharmaceutical treatment alternatives, such as cognitive behavioral therapy, for these patients.”

Gerlach also pointed out two other “concerning” findings from the study.

The first is that benzodiazepine users who ended up using the drug long-term were more likely to have a diagnosis of anxiety, which the report noted is sometimes an indication for long-term use.

The second finding is how long-term users were more likely to report sleep problems. Benzodiazepines aren’t recommended for long-term use as a sleep aid, since it may detrimentally affect sleep times the longer they are used.