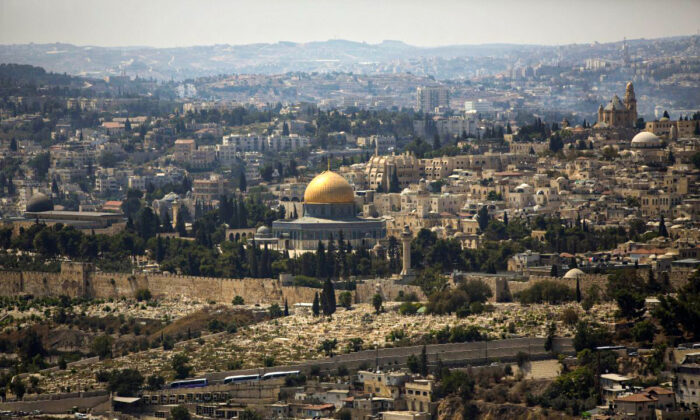 The Dome of the Rock Mosque in the Al Aqsa Mosque compound, known by the Jews as the Temple Mount, is seen in Jerusalem's Old City on Sept. 9, 2013. (AP Photo/Sebastian Scheiner)
Middle East

One person has died and four others have been injured at a holy site in Jerusalem’s Old City following an attack by a Palestinian gunman on Sunday, according to multiple reports.

The shooting occurred near an entrance to the contested flashpoint area known to Jews as the Temple Mount and to Muslims as the Noble Sanctuary.

Violence has previously broken out around the site, which is considered holy by both the Jewish and Muslim communities, on multiple occasions. The most recent was back in May when 17 Israeli police officers were injured and 88 Palestinians were hospitalized during violent clashes at the site, according to The Times of Israel.

Monday’s attacker has been identified as 42-year-old Fadi Abu Shkhaidem from east Jerusalem. Shkhaidem reportedly used an automatic weapon to shoot at civilians from short range.

Police fatally shot him within 32 seconds of the incident, The Washington Post reported, citing Israeli security forces. Shkhaidem was from the Shuafat refugee camp in east Jerusalem and was a known member of Hamas’s political wing, The Post reported. He has reportedly traveled to the Old City on a daily basis to pray.

A spokesperson for Hamas, the terrorist group that controls the Gaza Strip, said Abu Shkhaidem was a member of its coalition. The group did not claim responsibility for the incident but branded it a “heroic operation.”

“Our people’s resistance will continue to be legitimate by all means and tools against the Zionist occupier until our desired goals are achieved and the occupation is expelled from our holy sites and all of our lands,” spokesman Abdel Latif al-Qanou said.

The victim has been named as 26-year-old Eliyahu Kay, who was an immigrant from South Africa. Kay had recently worked at the Western Wall, the holiest site where Jews can pray.

In a statement published Sunday, the South African Jewish Board of Deputies (SAJBD) said it was shocked at the “devastating” news of Kay’s murder, and confirmed he had passed away in Hadassah Hospital.

“Kay (26 years old), a tour guide in Jerusalem, was murdered by a Palestinian gunman, while on his way to pray at the Western Wall (Kotel). He later died in Hadassah Hospital,” SAJBD said.

“The South African Jewish community is reeling from shock. Our heartfelt condolences go to his parents Avi and Devora Kay, his fiancé and his family and friends in Israel and South Africa. May his memory be a blessing. Baruch Dayan Emet,” the board added.

Paramedics said one of the four other Israelis injured in the attack was in serious condition and the three others suffered minor injuries, NPR reported.

The entrance to the Old City was immediately closed on Sunday and is currently being investigated by local officials. Israeli Prime Minister Naftali Bennett directed security forces to increase their presence and be on high alert for further attacks.

“On behalf of the government ministers, I share in the sorrow of the family and join in the prayers for the recovery of the wounded,” he said at the start of the weekly Cabinet meeting.

“Earlier this morning, the Public Security Minister and the Israel Police Inspector General briefed me privately on the incident. Our forces on the scene acted very quickly. Two policewomen and one policeman quickly neutralized the terrorist,” Bennett added.

“Nevertheless, this is the second recent terrorist attack in Jerusalem. I have directed the security forces to prepare accordingly and be alert, also over concern for copycat attacks. We need to be on heightened alert and prevent future attacks” the prime minister added.

Sunday’s incident is the second such incident in the holy city in recent days, although shootings around Jerusalem’s Old City and its holy sites are relatively rare, due to a high police presence in the area.

On Wednesday, two members of the Israeli border police were stabbed by a Palestinian teenager, who was fatally shot by police at the scene.