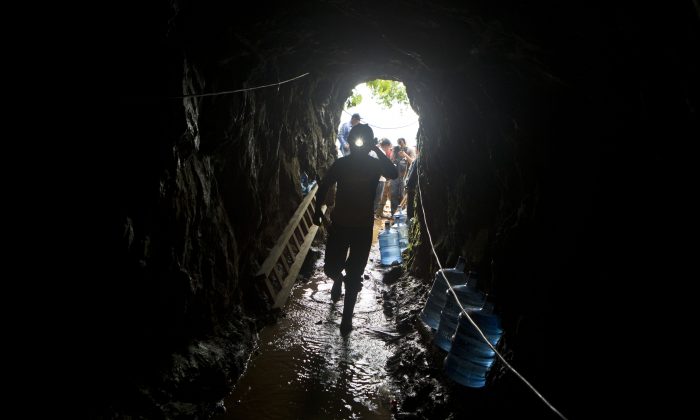 A miner enters the El Comal gold and silver mine to help with rescue operations after a landslide trapped at least 24 miners inside, in Bonanza, Nicaragua, on Aug. 29, 2014. (Esteban Felix/AP Photo)
Americas

MANAGUA, Nicaragua—One member of an Indigenous community in Nicaragua was killed and three others were missing after assailants shot at them on Nicaragua’s Caribbean coast, activists said Wednesday.

Environmentalist Amaru Ruiz, director of the Del Río Foundation, suggested it was the latest attack by settlers who have invaded Indigenous lands. The Nicaraguan army and national police did not immediately respond to requests for comment.

Ruiz said the four Mayangna men were working in wildcat mining in the Bosawas nature reserve when they were shot at. Three fled but one died at the scene.

It was the latest of several attacks this year that have killed dozens of Miskito and Mayangna people around Bosawas. The reserve has been hit by illegal mining and logging despite its status as a protected area.

An attack in August reportedly killed nine Miskito people and three Mayangnas. The Nicaraguan government did not confirm those killings.

Indigenous activists say the government of President Daniel Ortega has not done enough to address the problems on the jungle-clad coast, something his administration denied.

The Center for Justice and Human Rights on the Atlantic coast of Nicaragua said at least 49 Indigenous people have been killed by settlers since January, and many others have had to flee their homes.

Activists say many of the settlers moving onto the lands are former soldiers linked to timber and illegal logging interests.