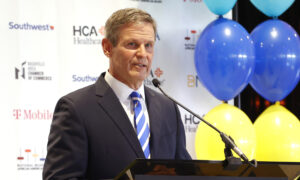 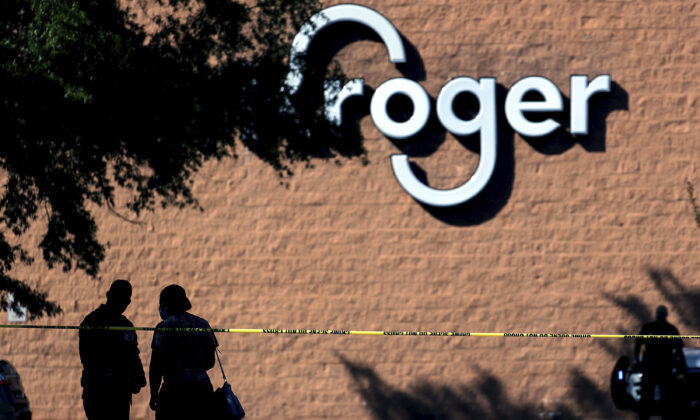 Police guard the crime scene following a shooting at a Kroger's grocery store in Collierville, Tenn., on Sept. 23, 2021. (Patrick Lantrip/Daily Memphian via AP)
US News

Authorities near Memphis, Tennesse, said that a shooting inside a Kroger supermarket has left at least one dead and about a dozen people injured on Thursday afternoon.

The alleged gunman died of a self-inflicted gunshot wound, police in Coillerville confirmed to local media. Other details about the nature of those who were injured were not provided.

Police Chief Dale Lane, who confirmed the deaths and injuries, said it was “the most horrific event that’s occurred in Collierville history.”

“It’s with a broken heart that I have to stand before you today,” Lane also remarked to reporters. “Please keep the families in your prayers.”

Lane said that officers were dispatched to the Kroger at around 1:30 p.m. local time, adding that he doesn’t know how many people were inside the store at the time of the shooting.

“We found people hiding in freezers and in locked offices,” Lane said, adding that one employee was rescued from the roof. “They were doing what they had been trained to do. Run, hide, fight. I hate that we had to do it here.”

The alleged gunman’s identity and motive were not disclosed.

“The suspected shooter’s vehicle is in the parking lot and we are waiting on some additional equipment to get here to be able to safely check that vehicle as well as some property that was on him,” Lane told reporters on the scene.

Meanwhile, the extent of some injuries was described by the police chief as serious, according to local media.

Lane did not elaborate on the type of weapon used by the shooter. He told Local24 that it’s not clear if the shooter was a former employee at the store.

Glenda McDonald, who works at the Kroger location, said she was not injured.

“I just ran out the door,” McDonald said after she recalled hearing something like a gunshot inside the store, reported USA Today. “I left my purse, my keys, everything.”

The Tennessee Bureau of Investigation is responding to the scene, Lane told Local24.

Nearby Collierville High School was placed on lockdown after the shooting.

Collierville, located in Shelby County, is a suburb of Memphis.