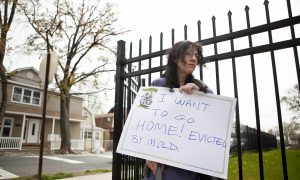 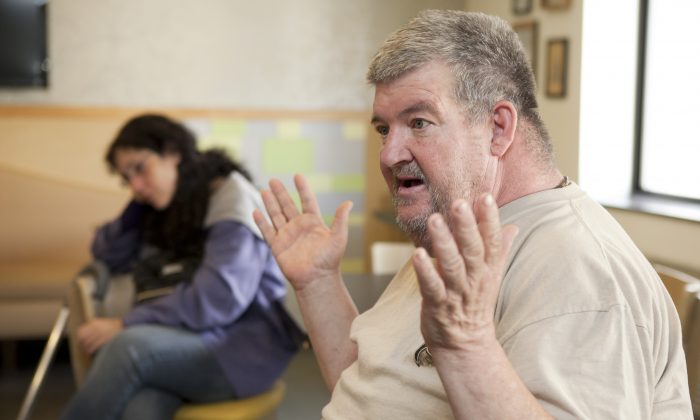 Michael Dautheny (foreground) and Allison Puglisi on May 7 at the Staten Island Ramada Inn, where the two have been living after Hurricane Sandy made them homeless. (Samira Bouaou/The Epoch Times)
New York

NEW YORK—The first chunk of federal Sandy Aid for New York City, $1.77 billion, was approved last week and is officially on its way.

The money is part of a $16 billion package that President Obama signed into law on Jan. 29 for repairs and restoration of areas affected by Hurricane Sandy. The federal funds are allocated through Community Development Block Grant Disaster Recovery packages.

New York City applied for, and will receive, $1.77 billion for a partial recovery action plan, known as Action Plan A. It is expected that there will be subsequent action plans to bring additional funds in the coming months.

“With the federal approval now in place, we’re going to see that this relief money starts flowing to home and business owners as soon as possible,” said Mayor Michael Bloomberg at a press conference Friday.

In the immediate wake of Hurricane Sandy, the city of New York provided impacted New Yorkers with everything from meals to business and home recovery. But many recovery efforts have stagnated in the six months since the storm.

Sen. Charles Schumer, who has been a staunch advocate for post-Sandy recovery relief from the federal government, was also on hand at the announcement Friday to note the desperate need for a financial lifeline for home and business owners.

“It is a turning point in our recovery from the storm, but our work won’t be done until houses are totally rebuilt, businesses reopen, and roads, bridges, schools and other infrastructure has been repaired, stronger than it was before,” said Schumer.

Schumer has also been fighting for federal assistance for vulnerable New Yorkers made homeless after the storm who are still living in hotels paid for by FEMA and the city.

The U.S. Department of Housing and Urban Development has agreed to provide temporary rental payments to landlords in order to help families displaced by Sandy. Called Disaster Housing Assistance Program (DHAP), the program was used extensively in the wake of Hurricane Katrina. It will give low-income Sandy victims a maximum two-year housing voucher.

Under normal circumstances, block grant money cannot be used for rental subsidies, but the mayor’s office of Housing Preservation and Development (HPD) sought out the voucher for displaced, low-income New Yorkers.

According to HPD, they will get $20 million for rent subsidies through the block grant that can be used for up to 600 households. The city has said it will start reaching out to eligible households at the end of May, and the program can be up and running within six weeks.

There are currently 435 households still in the New York City hotel program, the majority is already on track to either receive public housing assistance or return to homes still being repaired. The other 196 households are due to be evicted from the hotels on May 15.

Oral arguments in a lawsuit against the city to keep Sandy victims in the hotels until they can get housing are being heard in the Manhattan federal court Monday afternoon. A decision in the case, filed by Legal Aid and Weil, Gotshal & Manges LLP, is expected by Wednesday.

One of the families that might have to leave the hotel system on May 15 includes a mother and her 6-week-old child.