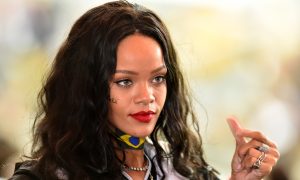 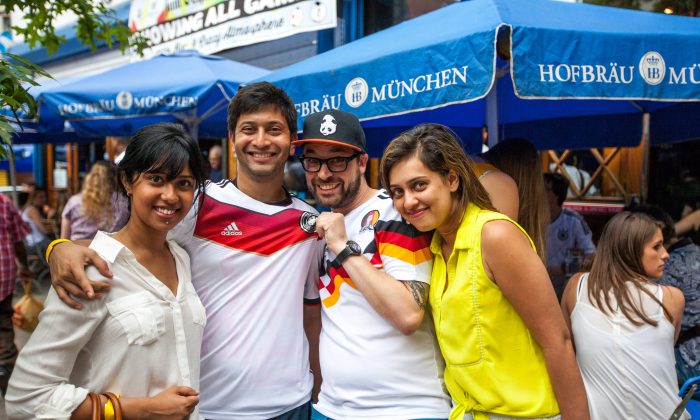 “I follow Germany because Podolski and Klose are Polish-born like me. I’ve seen them live during the 2006 World Cup in Germany, and in Euro 2012 in Poland.” Yen Drek (2nd R)
New York

NEW YORK—The East Village New York Bavarian indoor beerhouse, Zum Schneider, was a venue for a lot of merriment and glee, when Germany won the World Cup final. Tickets sold out within 2 hours, and bar manager Matthias made sure ticket-holders got value for their money, watching the match in an authentic German atmosphere.

Urging the crowd on with cowbells and guttural football chants, Matthias soon had the audience cheering and brandishing imaginary yellow cards as if they were on the touchline in Rio de Janeiro’s famous Maracana Stadium.

We spoke to some of these revelers, and got a glimpse at the backstories that led them to the East Village, on what was the biggest occasion for German fans since July 8, 1990, when West Germany beat Argentina in Rome to capture their third World Cup trophy.

Decked out in their finest national team jerseys, Vanessa and Chantal Kranz decided to watch the game in the East Village, because of its historic reputation as Kleinedeutschland (Little Germany). According to the Colorado-based sisters, they’re used to watching German games at large-scale public viewings in Bochum, where tens of thousands of fans, unable to travel to the major tournaments for various reasons, would gather.

Ann-Christin Goldberg, 21 was wearing a Michael Ballack jersey in honor of the great German football pundit, and her group of au-pair friends made a special effort to rendezvous in the East Village to watch the game. This group of friends, hailing from Berlin and Cologne, have known each other since elementary school, and traveled from as far as New Jersey and Connecticut, as they had enjoyed the atmosphere so much in previous games. They anticipated that the Germans would win, and were relieved to see the ball ripple the net after Mario Goetze’s extra-time volley.

Anthony and Martin were quite sanguine about the whole affair, as they only support Germany “by proxy.” The Brooklyn and Manhattan residents paid homage to their Austrian heritage, by donning Bavarian lederhosen/breeches, and going along to support their German neighbors. Both were proud to do so, as they were highly impressed with the German players’ sportsmanship, after they had beaten Brazil in the semi-final.

Brandi Duy brought her infant son Otti to try and make sense of the occasion. The smiling little cherub was exuding happiness regardless of the score, but his father, Jeff Duy, was keen to see the Germans run out as winners. Otti’s paternal grandfather emigrated from Germany to Canada, and ensured that Jeff was raised with a sense of German national pride. Indeed, the 10-year Queens resident was born the same year that Germany secured their second World Cup trophy in Munich (1974), and remembers when previous German greats, such as Karl-Heinz Rummenigge, Jurgen Klinsmann, and Matthias Sammer plied their trade in the West-German colors. In fact, he still winces at the memory of Harald Schumacher’s brutal foul on Patrick Battison in the 1982 World Cup semi-final between West Germany and France.

Compelled by their sheer fanaticism for the game, Yen and AJ, accompanied by AJ’s wife, gathered in the East Village to take in the final spectacle of this 2014 World Cup. They had watched every game of the tournament so far, and, on the basis of what they’d already seen, fully expected a German victory. Yen’s initial prediction of 2–1 to Germany had to be adjusted once the game went into extra time, but his confidence in the German ethos was rewarded when the Germans netted the winning goal in the 113th minute, ensuring that the FIFA World Cup trophy would return after the game.

Yen, a Polish native who has lived in New York City for 5 years, was eager to stress that he supports Germany on account of Miroslav Klose and Lucas Podolski both being Polish citizens who declared to play for Germany. A one-time football analyst for a Danish media outlet, he has seen Germany play live in both the 2006 World Cup in Germany, and the EUEFA Euro 2012 competition in Poland.

Laura Schreiber and Larissa Herwig were treated to a vacation in New York by their mothers, since they had both just recently finished high school. So even though they were fully aware they’d be missing out on the jubilant festivities in Kassel, in central Germany, they were also delighted to be dancing on the Avenue C after the game. One of their favorite players, Manuel Neuer, played a large part in ensuring their prediction of a German victory was accurate.