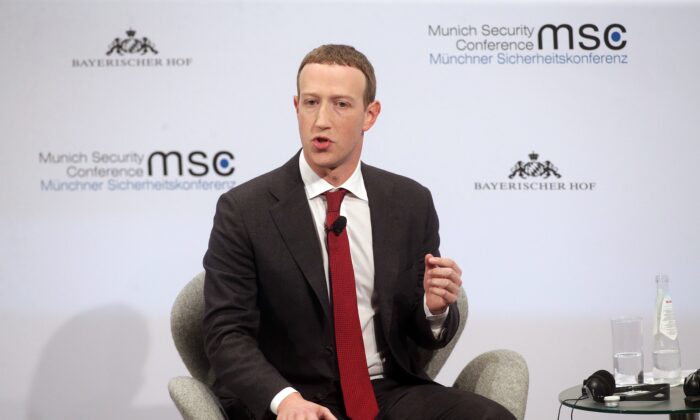 A regulatory framework that seeks to preserve free speech online needs to be adopted for social media before repressive countries like China begin influencing the rules about the free flow of information, Facebook CEO Mark Zuckerberg told global leaders and security officials in Europe over the weekend.

Zuckerberg told the Munich Security Conference in Germany on Feb. 15 that he was “very worried” that countries like China were encoding “authoritarian values” into how the internet is regulated.

“To encode democratic values, open values, we’ve got to move forward, move quickly, before more authoritarian models get adopted in a lot of places first,” he said, according to media reports. “Where people can share and inform communities, that is a positive force.”

Zuckerberg’s remarks echoed those from an Oct. 17, 2019, speech at Georgetown University in which he said his company has refused to expand into China because its “very different values” don’t align with Facebook’s.

“Until recently, the internet in almost every country outside China has been defined by American platforms with strong free expression values,” he said. “There’s no guarantee these values will win out. A decade ago, almost all of the major internet platforms were American. Today, six of the top ten are Chinese.”

“It is bad enough when local laws “undermine free expression and people’s human rights, [but] it’s even worse when countries try to impose their speech restrictions on the rest of the world,” he said.

China “is now exporting their vision of the internet to other countries.”

Zuckerberg faced criticism from the left for saying in that address that he didn’t “think it’s right for a private company to censor politicians or the news in a democracy.”

“As a principle, in a democracy, I believe people should decide what is credible, not tech companies.”

In Munich, he said Facebook now employs 35,000 people to review content and handle security issues. More than 1 million fake accounts are suspended each day and “the vast majority are detected within minutes of signing up.”

Zuckerberg’s latest speech comes as U.S. lawmakers are under growing pressure from both left and right to act legislatively against Facebook because of how the company is thought to treat users.

Democrats claim Facebook favors President Donald Trump and tipped the scales to get him elected. Critics claim Facebook was asleep at the wheel while Russia used it to try to affect the outcome of the 2016 presidential election.

The European Union is considering various antitrust proposals aimed at Facebook, which has more than 2 billion users worldwide.

In the Georgetown speech and in a March 2019 Washington Post opinion piece, Zuckerberg had previously asked for the regulation of social media companies. In Munich, Zuckerberg said Facebook has gotten better at fighting online election interference.

“I do think that there should be regulation on harmful content … there’s a question about which framework you use for this,” he said in Munich.

“Right now there are two frameworks that I think people have for existing industries—there’s like newspapers and existing media, and then there’s the telco-type model, which is ‘the data just flows through you,’ but you’re not going to hold a telco responsible if someone says something harmful on a phone line.”

“I actually think where we should be is somewhere in between,” he said.

German-born Dallas, Texas-based attorney Dr. Nick Oberheiden, who studied law in Munich, told The Epoch Times “it was very interesting” that Zuckerberg chose to address “a world-preeminent military and national security conference,” as opposed to a “Las Vegas social media conference with some techies.”

“But no one has asked what he was doing there,” he said.

Leaders and officials of countries whose values run counter to those of the United States “want to befriend him personally,” said the lawyer, whose firm, Oberheiden P.C., operates in 11 cities across the United States.

“Facebook is building a database that may compete with or supersede the databases of government agencies in some countries,” he said. “I think the intelligence community that was present at the Munich conference more and more relies on the digital, detailed information that social platforms can provide.”

“Should all countries have the same access?” he said. “Why is a social media entrepreneur at a military and national security conference?”

It’s “just not an obvious forum for an American entrepreneur,” he said. “We need to stimulate a debate that is strikingly missing.”

The rise of Facebook has “revolutionized the definition of what can be considered national security,” Oberheiden said.

“It is no longer just military secrets, and who is your spy, but is the underlying economic information … and trade secrets, individuals’ locations, and their connections with other individuals.”