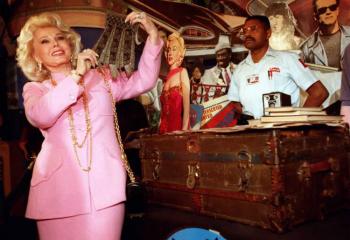 Zsa Zsa Gabor reportedly had to return to the hospital on Tuesday. (Kim Kulish/AFP/Getty Images)
Entertainment

Zsa Zsa Gabor ‘Not Responsive,’ Rushed Back to Hospital

Angela Wang
View profile
Follow
biggersmaller
Print
Zsa Zsa Gabor was rushed back to the hospital for being “not responsive,” her representative John Blanchette told Reuters.

Two weeks ago, a priest read her last rites at the UCLA Medical Center after being hospitalized for the second time in about a month.

Gabor said she wanted to spend her last days at home and was later reported as doing better. Recently, her husband Prince von Anhalt had to call emergency services. She was rushed back to the hospital right away.

The 93-year-old former beauty queen was initially hospitalized because she accidentally fell from her bed on July 17 while she was watching "The Price is Right" in her home. She had a hip replacement and a blood transfusion.

However, she had to return days later and have blood clots removed from her chest.

Several weeks ago, Blanchette said that in her life, Gabor "had a great run."

"She was friends with five presidents, kings and queens, the rich and famous."