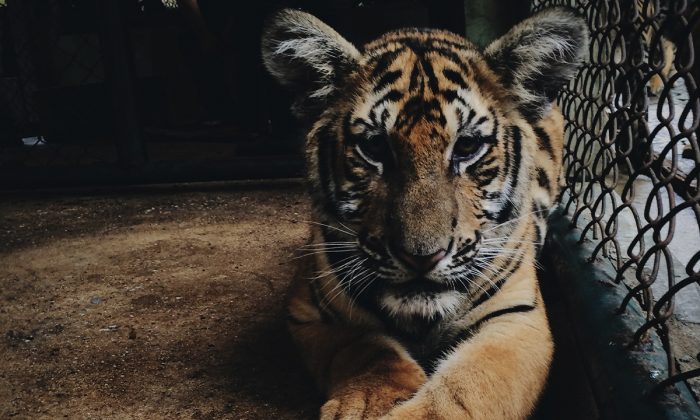 As zoo visitors look on, a group of men toss a donkey into the water as two tigers wait.

At the Yancheng Safari Park in eastern China, the donkey is seen being dragged out of a truck before it is thrown into the moat.

The donkey was apparently tossed amid a dispute between the zoo’s managers and a zoo investor. Their argument was said to be about a lack of profit, The Telegraph reported.

The Changzhou Zoo claimed the donkey was tossed into the water “in a fit of rage” and apologized to the visitors who saw the gruesome scene.

The video shows a tiger jumping on the donkey after it was thrown in the water. The other tiger is then seen clawing the head of its prey.

Witnesses told the Telegraph that the men who threw the donkey in the water had also attempted to take it, along with several other animals, out of the park. They wanted to sell them.

Zoo security then stopped the men, and they took the animals to the tiger enclosure.

An investor was apparently behind the gruesome scene, according to zoo officials. And the men were later identified as employees of the shareholders, SCMP reported.

An unnamed investor was quoted by the Telegraph as saying, “Since we could not have any benefits, we thought why not feed to the tigers, at least we can save on animal feed.”

However, the zoo issued a statement, saying it stemmed from a legal case involving the zoo and another firm. The case led a court to freeze the zoo’s assets, and it meant the zoo couldn’t sell its animals, the BBC reported.

In China, as the Telegraph reported, it’s common for people to pay to watch tigers eat live cows and chickens for “entertainment.”

Dave Neale, animal welfare director with Animals Asia, told National Geographic that he is horrified about the donkey incident. He said that when he visited the same zoo in the past, he said that visitors could pay for live chickens and ducks to throw to tiger and lion enclosures for entertainment.

Neale said that in China, he has seen live sheep, goats, pigs, and cows for other predators.

Meanwhile, other zoo experts criticized how the facility handled its barriers.

“Zoo visitors in China have been known to throw rocks and garbage at animals. And sometimes animals are forced to perform for the public, an activity that respected accrediting agencies criticize on grounds of animal mistreatment,” according to National Geographic.

It adds: “This incident is the latest in a string of disturbing events involving Chinese zoos, which have earned a reputation as lacking in animal welfare standards. According to Cress, new wealth in China has led to a boom in zoo and aquarium businesses during the past 20 years, but a respect for animals and an understanding of best welfare principles has lagged behind.”

Seven tiger cubs were found frozen to death inside a car in a parking lot in Hanoi, the capital city of Vietnam, reported Vietnamese state media on July 26.

On Thursday, the authorities arrested Nguyen Huu Hue and two other suspects who had allegedly smuggled the seven dead tigers from the neighboring country of Laos, reported the AFP.

The dead animals were found in their car at a parking lot.

“Hue set up a company… which sells building material as a cover for the illegal trading of tigers and wildlife,” Cong An Nhan Dan, the official mouthpiece of the Ministry of Public Security, reported, according to AFP.

It’s yet not known if the cubs were smuggled from the wild or were sourced from the illegal tiger farms in Laos.

AFP reports that the cubs were meant for local consumption and some were to be smuggled to China.