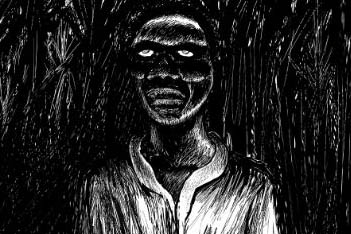 Illustration of a zombie in a sugar cane field in Haiti. (Jean-Noël Lafargue)
Beyond Science

In 1980, Clairvius Narcisse checked himself into a hospital in  Deschapelle, Haiti, almost 20 years after his family had buried him in their village’s cemetery.

His family knew his grave had been disturbed shortly after his death, but they didn’t know that a local bokor (vodou sorcerer) had stolen his body and effectively turned him into a zombie.

A combination of drugs are used in making someone a zombie. Tetrodotoxin, a neurotoxin 160,000 times stronger than cocaine, is rubbed into the skin, into a wound. This substance creates a comatose state that is sometimes mistaken for death. When a bokor turns someone into a zombie, this substance is used, followed by a hallucinogen, Datura stramonium, commonly known as Jimson weed.

Narcisse was first poisoned with tetrodotoxin by the bokor, the doctors pronounced him dead but his mind was still active. The bokor then used the Jimson weed and kept Narcisse for years in a servile state, working on a plantation, without control over his own faculties. When the bokor died, Narcisse wandered away and eventually ended up back in his home town with a horrific tale to tell.

He said he was not predisposed to believe: “I myself never would have thought that zombies could exist.”

Yet, upon studying tetrodotoxin and Haitian culture, Davis became a believer.

The cultural belief in zombies is key, he said. This is also a sensitive issue; the Haitian vodou beliefs, and in particular a belief in zombies, has been said to be widely misunderstood, contributing to a misconception of Haitian society. Zombies are a fringe belief in vodou and not part of its core practices.

Davis explains that the effect of the drugs is in part a placebo effect, reliant on a belief in zombies.

In Japan, people are often poisoned with tetrodotoxin by ingesting puffer fish. Expert chefs must carefully prepare the fish so as not to release the toxin it contains. Nonetheless, poisoning—sometimes fatal—occurs annually.

“The victims of the fish in Japan do not become zombies, they become poison victims,” Davis said. “In Haiti, though, a zombie is a whole set of beliefs.”

Davis said zombie-making is very rare, but it is a form of deterrent in a community. He said it is a social sanction against those who transgress the norms or laws of the community. Like capital punishment, he said, the concept that one could be made into a zombie for breaking the rules is an effective deterrent even if it is not often done.

Many scientists have rejected Davis’s research, but Yale African art historian Robert Farris Thompson defended him. A University of Michigan article, titled “Haiti and the Truth About Zombies,” quotes Thompson’s introduction to Davis’s book “Passage of Darkness”: “I would never have been steered in the right direction, taught to take the zombie phenomenon seriously as a social sanction of the greatest import, had I not come into contact with the research distilled in this volume by Wade Davis.”