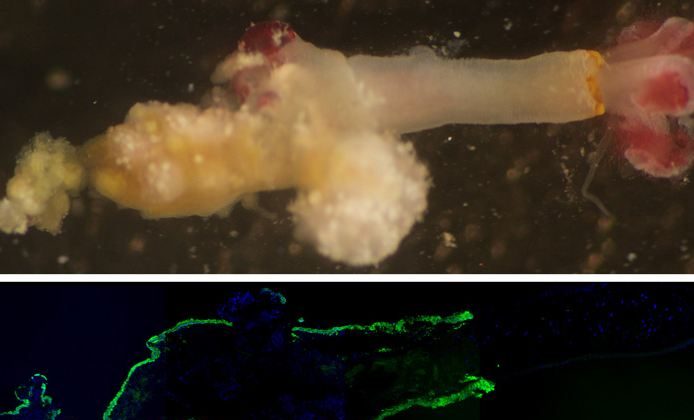 Zombie worms eat bones: “Mystifying sea worms” that live and thrive on the bones of whale carcasses use bone-melting acid to access nutrients within the whale bones, according to a new study.

“The acid presumably allows the worms to release and absorb collagen and lipids that are trapped in bone,” said Martín Tresguerres, one of the researchers with Scripps Institution of Oceanography at the University of California, San Diego, in a statement. “This model is remarkably similar to how mammals repair and remodel bone, however Osedax secrete acid to dissolve foreign bone and access nutrients.”

The worms use a kind of pump to secrete acid onto the bone. These “bone worms” lack mouths, so they must use the acid as a way to get the nutrients.

Bacteria that live with the worms could take one of the nutrients and turn it into other compounds for the worms, but that is not completely known or understood yet, according to the scientists.

“The Osedax symbiosis shows that nutrition is even more diverse than we imagined and our results are one step closer in untangling the special relationship between the worm and its bacteria,” said Greg Rouse, another researcher with Scripps, in a statement.

The scientists are planning further studies with colleagues at the Monterey Bay Aquarium Research Institute.