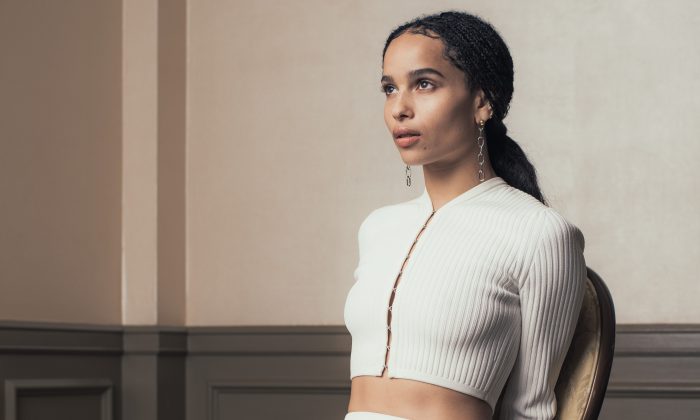 In this March 5, 2016 photo, actress Zoe Kravitz poses for a portrait to promote her new film "The Divergent Series: Allegiant" at The Four Seasons in Los Angeles. (Photo by Casey Curry/Invision/AP)
Entertainment

Zoe Kravitz’s DIY Plan to Change Things Up in Hollywood

LOS ANGELES—Zoe Kravitz has heard enough talk and she’s ready for some change.

She might have an enviable perch in the entertainment ecosystem with recent film credits as diverse as “Dope,” ”Mad Max: Fury Road,” and “The Divergent Series,” not to mention her famous lineage, but she’s also seen her share of darkness in Hollywood, too, from discrimination to stereotyping.

“People have tried to do that to me over and over again and I’ve been fighting it and fighting it,” Kravitz said on a recent afternoon interview. “I would get auditions and it would be like ‘they want you to play the best friend.’ And it’s like ‘why can’t I audition for the lead?’ Then it’ll be like ‘OK now you’re the quirky black girl,’ or ‘now you’re a hippie.’

“I can play all kinds of people. I don’t have to play myself.”

She’s made up her mind to take a stand, not only in the kinds of roles she chooses, but also in how she’s going to create change for herself.

Take “Allegiant,” the latest entry in “The Divergent Series,” in which Kravitz reprises her role as the loyal, fierce Christina. Sure, she’s the best friend to Shailene Woodley’s Tris, but she’s one of many significant female characters in the film, which also boasts admirable racial diversity.

In the Oscar-nominated “Mad Max: Fury Road,” too, Kravitz plays one of the wives of Immortan Joe who is escaping her captivity in the high-octane race across the wasteland.

“(Director George Miller) absolutely could have thrown four cute girls in the back of the car and been like ‘be scared.’ But he didn’t do that,” Kravitz said. “He said we were slaves … He wanted to feel that in our energy. He took the time to have us go a month early and [do] workshops with [feminist playwright Eve Ensler] to really understand what we were running from.”

And in last year’s “Dope,” a vibrant Sundance breakout from director Rick Famuyiwa, which Kravitz saw as an instant classic in the vein of “Friday” and “Boyz n the Hood,” she plays a suffers-no-fools dream girl with an edge.

Kravitz has faith in the industry, thanks in part to a poignant early experience in one of her first films—the 2007 Jodie Foster and Terrence Howard film “The Brave One.”

“(My role) was written for a blonde white Russian girl. I was like ‘I’ll audition for it anyway,'” she said. “It changed [director Neil Jordan’s] mind about how he saw that role.”

But in order to move things forward, Kravitz, who is the daughter of musician Lenny Kravitz and actress Lisa Bonet, knows she’s just going to have to do it herself—write, direct, and produce.

Kravitz has also started a collective of filmmaker friends, including cinematographers, directors, actors, and writers, to put her words into action. The goal is to write a script together, and they meet weekly to work.

She’s also planning to do her part by simply not taking roles she views as stereotypical.

“It’s our responsibility to say ‘I’m not going to take the same role over and over again.’ I mean, of course actors gotta eat, but if it’s something you believe in, we have the power to break the stereotypes by (a) writing our own things and (b) saying ‘no’ to the same thing over and over again,” Kravitz said.

“This industry is not colorblind, but I think actors can be.”