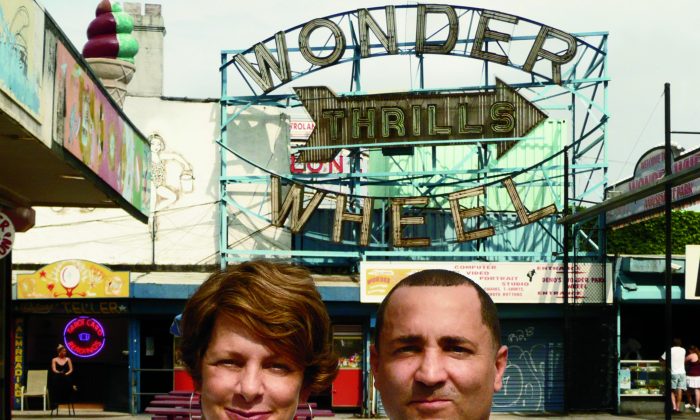 NEW YORK—Coney Island is one of America’s most iconic amusement parks. But Coney Island has suffered from neglect over the years. Neglect from the city, from developers, and from those who ravaged the park in the 1980s and ’90s when the crime rate in the city was at an all-time high.

During the Bloomberg era (2002–2014), the land in Coney Island became attractive to developers, who saw it as a golden ticket to a Six-Flags-like amusement park reconstruction and condos surrounding it. But the Bloomberg administration didn’t want to let go of the precious opportunity of making a fortune in tax dollars and land-use fees, and so began the battle for rezoning parts of Coney Island as residential areas.

It was at this time that filmmaker Amy Nicholson stumbled on an article about Eddie Miranda, the proud owner of the famed Zipper ride at Coney Island’s amusement park.

Straight-talking Brooklynite Miranda was in the process of mourning the loss of the park space that was sectioned off for redevelopment, and the ending of his lease on the park’s land.

The Zipper looks like an army tank’s caterpillar tracks with attached cabins that hold two people at a time. It sent people screaming and squealing as their change and metro cards went flying before it shut down in 2007 after Miranda lost his lease.

Nicholson, who loved riding the Zipper in Baltimore where she grew up, decided to tell the story of the ride in Coney Island through a short film, which she started in 2006. But after an interview with Domenic Recchia, who was then council member of Coney Island’s District 47, she realized that Coney Island, not only the ride, faced major changes.

“It was just like a typical documentarian—once you get a hold of something, you just keep following it,” Nicholson said in an April 15 phone interview.

“Zipper: Coney Island’s Last Wild Ride” is the result of six years of research, pursuing officials, interviewing stakeholders, and talking to the Zipper crew—the people who lived and worked around the park their entire lives.

Choosing to direct and fund the project herself while working a full-time job, Nicholson set out to expose the greed and the politics encircling the coveted land of Coney Island’s amusement park.

A Sense of Loss

The documentary starts with a candid, nostalgic sit-down with Zipper owner Miranda. We meet other Zipper crew members who, with their accents, mannerisms, and brash banter, do honor to the image of native Brooklynites.

The film then introduces Thor Equities CEO Joe Sitt and the folks at the Economic Development Corp. Sitt wants to buy up the land.

Nicholson creates interesting juxtapositions of the lawmakers’ voices talking over footage of the good ol’ days that shows people enjoying ice cream, sunbathing, and dipping in the water.

“Coney Island, of all places, illustrates the type of loss I was going after,” Nicholson said. It’s not so much a physical loss, but the loss of Coney Island’s character that was at stake for her—the wonky slot machines, the mom-and-pop food joints, and the Zipper.

The Spirit of Coney Island

While Nicholson says that she knew nothing about the history of Coney Island before making this film, she skillfully summarizes the five decades of the park’s history as it relates to its recent controversy.

In fact, one of the opening quotes in the film foreshadows the whole documentary.

“The whole history of Coney Island can be written as an attempt to impose order and civilization on a place that always manages to elude it,” author and journalist Kevin Baker was quoted to have written.

The film evenhandedly documents the political blunder of the city and the Thor Equities CEO, supplemented by relevant statistics such as the amusement park’s attendance over the years. This is a film for those interested in the park’s history and how it came to be the way it is today.

Granted, the film could have benefited from more personal perspectives from the crew, community, and especially from Eddie Miranda. But, by being fair and giving everyone roughly the same amount of screen time, Nicholson presented an objective and informative recounting of events.

“Zipper” airs on WNET/13 in New York on Monday, April 28, at 10 p.m. The film is also available on Amazon Instant and is soon to be released on Google Play.