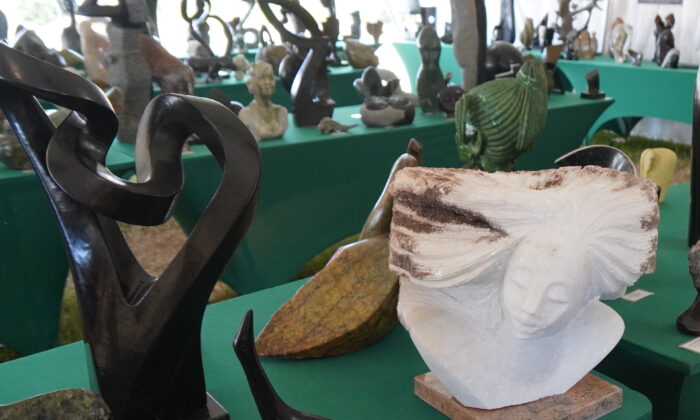 PUNTA GORDA, Florida–Brighton Layson sits staring intently at his hands as he methodically and meticulously chips away at a hard stone from his Zimbabwean homeland. Employing a craft that has been passed down through generations, he uses a hammer and chisel–relatively primitive tools–to turn the stone into a masterpiece. He and his countrymen are in Southwest Florida to promote and sell their work, while representing their country.

ZimSculpt, an exhibition of stone sculptures created by Zimbabwean artists, is currently on a world tour, and will be at the Peace River Botanical and Sculpture Gardens in Punta Gorda until April 18.

The stone commonly used comes from Zimbabwe and is mined in small-scale mines by hand, Vivienne Croisette, curator and owner of ZimSculpt, told The Epoch Times on a recent visit to the  gardens.

“The main stone is from the geological family of Serpentine,” she explained. “Intense heat and pressure over hundreds of millions of years have transformed them into hard stone.”

Demonstrating his skill, Layson is one of many artists “performing live” at the gardens. He found his passion for sculpting after working with his brother as an assistant in sculpting and then left to work for a short time as a fitter machinist. While at his engineering job, he said he began to develop sculpting tools and distributed his tools to other sculptors in the art industry. He returned to sculpting in 2010 and “never looked back.”

“My work reflects what I feel, think, and see,” he said. “Nature is my main inspiration.”

His work has been displayed and sold in countries such as Canada, Germany, the Netherlands, and the United Kingdom, Layson said.

Another sculptor, Passmore Mupindiko began his career by carving wood, creating items such as salad bowls, spoons, forks, trays, and bread and steak boards. It wasn’t until he visited Tengenenge Arts Community in Zimbabwe that he found his love for working with stone. His main subject areas are outdoor leaf bowls that attract birds, Guinea fowl, and most recently hummingbirds.

Mupindiko, 46,  said his inspiration comes from nature as well, sometimes gravitating to the abstract. But it is the stone that he “communicates with” and obtains his inspiration for his designs.

“I go into the bushes and observe nature,” he said. “I look at the stone and see something more in it.”

His work has been exhibited across the United States and in other countries, including France, the Netherlands, South Africa, Germany, Denmark, Canada, and the United Kingdom.

Croisette explained that the stone of Zimbabwe comes from “The Great Dyke” which dates back 2.5 billion years ago in a horse-shoe ridge that stretches 500 kilometers (nearly 311 miles). She said the dyke runs through the North and East areas to the center of the country and is rich in minerals of “every description.”

“Different areas of the dyke produce a different variety of stone,” she said.  “Over 200 colors of stone have been geologically cataloged, ranging in Mohs scale of mineral hardness from 1-5.5 on the scale of hard stones, with Granite being 6.”

Croisette said she spends seven months touring eight regions of Zimbabwe collecting work, and up to five months exhibiting around the world.

“It is impossible to just turn up in Zimbabwe and collect a show in a few weeks,” she said of her schedule. “Our shows take at least six months of preparation and it has taken 13 years to build up our extensive range of works.”

ZimSculpt travels every year with two-to-three sculptors, who put on live demonstrations of their craft, she said. The artists represent their fellow artists back home.

“This is a great experience for the artist, both culturally and financially,” she said. “Some of them have developed lifelong friendships along the way.”

While touring the gardens, Croisette pointed out that most sculptors find their “form of inspiration” in the shape of the rock.

“Each sculptor has their own personal style and will choose the stone to suit their style,” she said. “There is generally no pre-sketching–everything is created free-form.”

The sculptures are created by using stone tools—hammers, points, chisels, rasps and chasing hammers—that give different effects, she said. The sculpture finishing takes as long as the creation itself, she said.

“The smooth effect is achieved by using wet and dry sandpapers–sanding the piece for hours in water,” she explained. “This is called simply ‘washing’.”

Croisette said the artists will sometimes polish their works, which gives a “dramatic difference in texture and color.”

“The stone is heated, which expands the pores of the stone and a natural floor wax is applied to the designated area,” she said. “This is left to soak into the stone until it is cool and then buffed up to a high gleam which finishes the work.”

Some of the works displayed are multigenerational, Croisette told The Epoch Times.  The craft is handed down from one generation to the next.

Not only the sculptures are for sale. There are also earrings and smaller items that can be placed as decorative pieces in the home, she explained. Prices for sculptures range from three to five figures depending on the size and material used.

The profits from ZimSculpt exhibitions are reinvested in new artworks, Croisette said.

“It is used to bring artists overseas, and to market Zimbabwean talent internationally,” she said.

Proceeds from the sculptures sold go directly to the artists, who use it to pay for everyday living expenses and school fees for their children, she explained.

“ZimSculpt’s purchases represent a regular source of income for many artists for several months of the year,” she said. “The money from their sculptures goes a long way in their local communities.”

Also, an Artist Family Scheme has been established to benefit the families of artists who have died of HIV, she said.

Croisette went on to say they have “received monetary donations to buy clothes, pay for school fees, and feed their children so they are able to be educated.”

Donated items—clothes, toys, and shoes—are collected and distributed personally in between tours, when Croisette and her husband, Joseph, visit the artists in the communities in Zimbabwe.

Croisette said the exhibit has not been in Florida since 2011, adding that it has been a great success.

“This art has meaning,” she said passionately. “This art is imbued with extraordinary, intense spirituality–it will get in you, and work on you forever.”