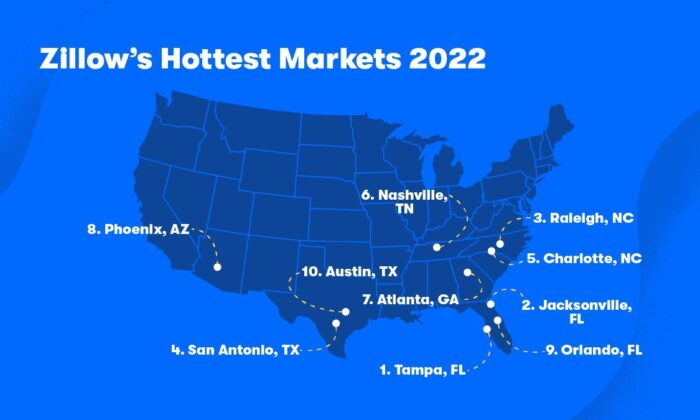 The hottest housing markets of 2022 will be spread across the Sun Belt for the second year in a row, with Tampa topping the list, predict experts with online real estate giant Zillow.

With far more buyers than available homes, those areas should be among “the most competitive in the U.S.,” the Seattle-based company’s research suggests.

Home shoppers in those markets will face “strong competition, rising prices and limited inventory that will be snatched off the market quickly,” Zillow experts wrote in the report.

Tampa tops the list “due to a combination of strong forecasted home-value growth, a thriving job market, relatively scarce and fast-moving inventory, and demographics that indicate a good number of potential buyers,” according to the report.

So anyone thinking of buying in Tampa would be wise to do it quickly, experts say.

The mid-Florida metro was fourth-fastest when it came to rising home values last year. This year, price are expected to shoot up there faster than anywhere else in the nation.

“Home buyers are attracted to markets in the Sun Belt that offer relative affordability, fast-growing economies and weather that allows them to enjoy the outdoors year-round,” says Zillow economist Alexandra Lee.

“Across the board, sellers will remain in the driver’s seat, but especially so in the hottest markets. Buyers should be ready for strong competition for homes, which means bidding wars and homes flying off the market only days after they are listed.”

The remaining metro areas in the Top Five—Jacksonville, Raleigh, San Antonio and Charlotte—have a combination of factors that put them on the hottest markets lists.

Experts predict strong home-value growth, high job growth, and plentiful buyers in each of those areas of the country.

“Additionally, these markets have historically not been particularly sensitive to rising mortgage interest rates or a slowing stock market, two risk factors for housing and the economy overall,” Zillow’s report noted.

Raleigh bumped up from third-fastest in home-value growth last year, to second in 2022; Jacksonville’s rising home prices jumped from seventh to third.

The fastest-growing markets in 2021, Austin and Phoenix, are expected to drop to seventh and eighth, respectively, this year, Zillow predicts.

Across the country, anyone looking to sell a home stands to do well. Economists are forecasting 14.3 percent home-value growth across the nation through November.

It’s been an exciting time for buyers, sellers and real estate agents, says Lisa Duke, who’s been in the business of selling homes in Jacksonville for 20 years. She’s listed homes recently that have attracted a dozen bids from buyers within hours of hitting the market.

Part of what’s driving up home prices in her state is the massive influx of people coming to Florida from other parts of the country. Buyers coming from California might have expected to pay $600,000 back home, but in Jacksonville, same house would go for about $200,000, Duke said.

“I don’t know the exact number,” she said. “But they can buy way more house here than they could there. And I think that’s the attraction. So that’s why our prices are escalating so fast, and going so high, because they feel like, Oh, these are cheap!”

In Jacksonville, even Zillow was responsible for driving up home prices, she said, especially during the latter half of 2021.

“They were buying them up like crazy,” Duke said. And Zillow was one of many investors willing to pay more than market value, she said.

COVID-19 has brought about change, too. For instance, it’s changed what many buyers want in a home. These days, many require at least one home-office space, and ideally, two, if both spouses work from home.

“That’s also what allowed northerners to come here, because now they can work from home and they can live in Florida, and have their [typically higher] northern income,” she said.

Many flocking to Florida have earned a new name—sunbirds.

Florida historically has attracted  by older part-time residents, known as “snowbirds,” who come for winter, then migrate home to milder Northern climates in the summer. Sunbirds do the opposite, Duke said. They’re younger, and want to hit the beach or bask by the pool with their laptops during the hottest months, then go back north for the winter.

Frequently, she sees out-of-town buyers make offers well above asking price, in order to have the winning bid.

One of her buyers was looking at houses about a year and a half ago, and had $250,000 to spend. He didn’t find what he needed, so he’s looking again, dismayed to discover that houses that were priced at $150,000 when he was looking before, now are priced at his uppermost limit.

Causing price spikes like that were huge investment companies that swooped in on almost every listing, up until just a few months ago, making cash offers “on just about any property that hit the market,” Duke said. Before that began, the average home she’d sell was about $250,000. Now, most sales are in the $350,000 range, she said.

That makes it tough for local families just hoping to move to a larger home after the birth of a baby, or older folks hoping to downsize to a smaller place. Many who want to move to another home can’t now, she said, because prices are so high.

And while some sellers liked the idea of a quick sale with a cash-rich investment buyer, others are sad to sell their lifelong home to an investment company, rather than buyers eager to love it and make it their own.

“For the handful that are sentimental, it’s more about, ‘Who’s getting my house?’

A month ago, nurse Hazel Sapp was happily surprised when a buyer made her an offer she couldn’t refuse on her home in Lake Butler, a small rural community about 53 miles from the heart of Jacksonville. She bought the house in early 2019 for $115,000. She sold it 33 months later for $78,000 more than she paid.

She made that deal just in time, says Duke. “That craziness ended about a month ago.”

A sign the frenzy is cooling is inventory. In a normal market, there are an equal or nearly equal number of buyers and sellers, and listed homes may take about six months to sell. Now, there are so many more buyers than sellers, it’s expected that all homes on the market would sell in a month and a half, Duke said.

“Now, we sell in days, rather than hours,” she added, “or in weeks, instead of days. So it’s still a very good market.

“It’s the age-old law of supply and demand. And demand far exceeds supply.”

Rent has zoomed up recently, as well, she said. She manages more than 60 properties. Now, when tenants move out of a $1,400-a-month home with three bedrooms and two baths, she sets the price for new tenants at $1,700.

Last year, the hottest housing market in the country was Austin, which fell to No. 10 this year. Denver, last year’s fifth-hottest market, fell to 15th on Zillow’s list this year.

Beyond the Sun Belt, many of the hottest markets are expected to be in the Midwest this year, Zillow predicts. Their experts list Salt Lake City (13th), Kansas City (14th), Oklahoma City (16th), Columbus (17th) and Indianapolis (18th).

But even buyers in those markets shouldn’t expect discounted pricing.

Home values in every metro area are forecasted to grow by at least 10 percent over the next year, with the exception of San Francisco, which is expected to come in slightly short of that.