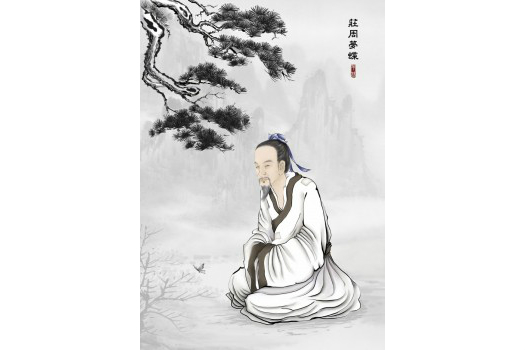 Zhuang Zi: The Major Patriarch of Daoism After Lao Zi

Zhuang Zi (369–286 B.C.), or Chuang Tse, never served as a prominent government official during his lifetime. However, for a short period of time, he was a minor official in his hometown. He was once offered the position of prime minister by the king of one state, but he refused it.

Zhuang Zi compared trading his freedom for a government official’s role to a divine turtle selling his shell to be worshiped.

Viewed as an eccentric then, Zhuang Zi lived a very poor but never pessimistic life. He distanced himself from the official attendants who enjoyed luxuries, and he had no discomfort with patched clothes, an empty rice-bowl, or even sometimes living on charity.

He advocated enlightenment through disengaging mundane worries and following the natural rule of Dao. He was recognized as a major patriarch of Daoism along with Lao Zi.

Since Daoists did not pursue fame, wealth, or careers, nor were they interested in public recognition, little is known of Zhuang Zi’s life. However, the book bearing his name, “Zhuang Zi” (also known as “The Pure Classic of Nan-hua”), has been widely admired for generations, and it has prompted thousands of volumes of research and interpretive literature.

Recognized as a wise and imaginative person, Zhuang Zi used numerous metaphors and humorous sarcasm in his writings. He believed that nature should be left undisturbed, and that humans should seek to be in harmony with the environment.

“Zhuang Zi” has attracted people from a wide range of social classes, and the author’s philosophy has had a profound impact on people’s everyday lives. The book has been translated into many languages around the world.

In “Zhuang Zi,” he reflected upon the negative effects of so-called civilization, and expressed an aspiration for spiritual freedom. This philosophy later found its way into secular literature and visual art. He advocated being free from mundane attachments, and was strongly against people spending their lives pursuing worldly glories or material treasures.

Zhuang Zi believed that the greatest achievement in a society was to do “action without action, govern by governing nothing (wu-wei).” This encouraged action so perfect that everything followed its natural course, and there was no visible trace of the author; and it was fully in tune with the original nature of the world—the Dao.

Therefore, in a society, the ruler should rule without deliberate intervention. With no pressure from the ruler, everyone follows his nature with spiritual freedom and the society will thus run in harmony.

Unlike institutional Confucianism, which is concerned with the social responsibilities of its followers, Zhuang Zi’s philosophy focuses more on an individual’s private life and spiritual wisdom. Later, many Chinese intellectuals turned to his philosophy in the turbulence of dynasty changes.