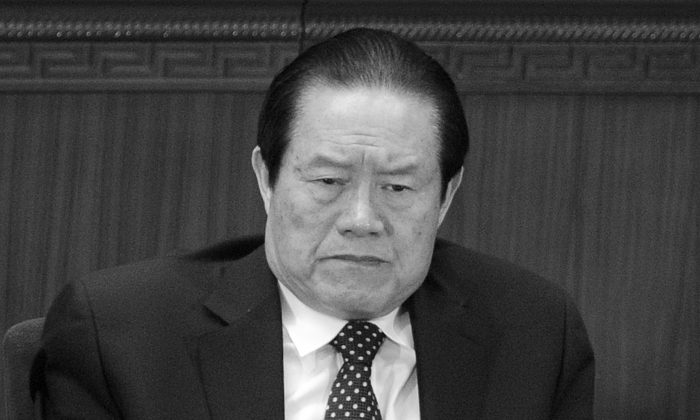 A string of Chinese officials have been unceremoniously dismissed from their posts and put under investigation recently, all because of their ties with the former communist security czar Zhou Yongkang. Political analysts said that the current Party leadership is uprooting each of Zhou’s political networks built through decades of backroom dealing and patronage ties.

One key tying together the series of recent investigations, however, has been little explored: the fact that all of the men were involved in the persecution of Falun Gong.

Falun Gong is a spiritual practice that has been suppressed by the Communist Party since 1999, after nearly a decade of explosive popularity in China.

Surveilling, arresting, locking up, and torturing Falun Gong adherents formed the core of Zhou Yongkang’s career from the early 2000s onward. Along the way he installed loyalists who were also dedicated to the campaign. And it is these individuals that are now being dug out one-by-one by the Party’s investigation squad, under the guise of anti-corruption.

Once they are through with his confederates, political analysts say that Zhou Yongkang will be next on the menu.

One of the locations in China where the persecution of Falun Gong has been most rampant is Liaoning Province, which is located in the northeast. It became known for its network of labor camps and their harrowing accounts of brutal torture, and even of live organ harvesting.

Liaoning is where the labor camp Masanjia is located, a word that gained notoriety in the United States after a Goodwill employee from Oregon, Julie Keith, found a letter stuffed into a Halloween kit. The letter had been written by a Masanjia inmate, who was being forced to work all day. Keith’s discovery became national news in the United States.

Now, some of the officials who implemented the campaign against Falun Gong in Liaoning are being purged.

One of the most recent is Li Wenxi, the former chief of the Public Security Bureau in Liaoning Province, and the vice chair of the Chinese People’s Political Consultative Conference, a Party-affiliated advisory body.

He was put under investigation shortly before the Chinese New Year several weeks ago, according to overseas Chinese news outlets.

Sources in Beijing told Epoch Times that Li was an important figure in Zhou Yongkang’s network in Liaoning, and that he was involved in the organ harvesting carried out against Falun Gong practitioners there, involving organized crime and military hospitals.

Another high-level official to be taken down is Zhang Dongyang, the attorney general of the procuratorate, or prosecutor’s office, of Shenyang City. Shenyang, with its labor camps and military hospitals in proximity, was a known base of organ harvesting activity in China.

Zhang had been in his position for only a year by Feb. 18, when the 21st Century Economic Herald, a business publication, reported that he had been removed for “investigation.”

Zhang was a police officer in 1999, when the persecution of Falun Gong was initiated. His enthusiasm in carrying out the campaign—at the time the foremost political priority of the communist leadership, as set by then-Party chief Jiang Zemin, for whom the campaign was a personal crusade—saw his promotion to deputy commander of a brigade, and then director of the Public Security Bureau of Shenyang.

Falun Gong websites, which gain firsthand information from sources inside China about conditions on the ground, contain a number of reports documenting how Zhang and Li were involved in the campaign.

“All of what’s happening is a signal that a bigger case is being built, possibly against Zhou Yongkang,” said Xia Xiaoqiang, an independent political commentator and columnist.

Zhou Yongkang spent 18 years in Liaoning earlier in his career, and after he took charge of the security services, he promoted officials who would implement the campaign most enthusiastically, according to Heng He, a political analyst with New Tang Dynasty Television.

“Those people were all promoted, or started to work with Zhou Yongkang, during the persecution. They worked with him because of it,” Heng He said.

The persecution of Falun Gong had become the focus of Zhou Yongkang’s career from the early 2000s, after years of doing Party work in Liaoning, and then in the petroleum sector in Sichuan. In 2002 he was made minister of public security, and from there quickly became the head of the entire security apparatus.

The Party leadership is not removing these individuals because of their involvement in the anti-Falun Gong campaign per se, said Heng He.

Having the correct political stance made them effectively invulnerable to political foes, and they could indulge in as much corruption as they wished, Heng He said.

But now the tide has turned, and that campaign against Falun Gong is not a priority of the current leadership. The new leadership cohort is focused on weeding out the remnants of groups that exerted deep influence on Chinese politics in previous years.

“Xi Jinping must get rid of Zhou Yongkang, and openly, because Zhou directly challenged Xi’s authority” in 2012, said Heng He. Zhou was reported to have plotted a coup with now-fallen Chinese official Bo Xilai. “If Xi Jinping doesn’t act against Zhou, he’ll be considered weak.”