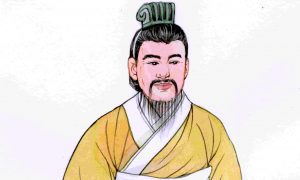 Xiao He: One of the ‘Three Heroes of the Early Han Dynasty’
0
Share Now
TelegramFacebookTweetEmailTellMeWeReddit
Copy Link 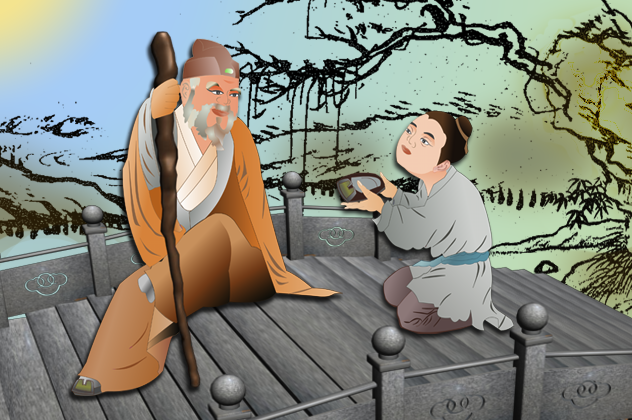 Zhang Liang, one of the Three Heroes of the Early Han Dynasty, was known for his tolerance and for showing respect for the elderly. (Catherine Chang/Epoch Times)
China

Zhang Liang: Another Hero of the Early Han Dynasty

He was a chief military strategist, minister, and adviser to Liu Bang (Emperor Gaozu), the founding emperor of the Han Dynasty.

Zhang Liang was famous for his ability to “win battles 1,000 miles away without stepping outside the command tent.” Along with his great talent in specialized military strategies, he was also known for his tolerance and respect for the elderly, and for his modest and frugal way of life.

Contrary to what might be expected of a gallant military hero, however, Zhang Liang was said to be a slim man and fair of face.

A ‘Chance’ Meeting in Exile

Zhang Liang was born into an aristocratic family in the Han state (韓國) during the Warring States Period (206 B.C.–A.D. 220). For five generations, his ancestors served its rulers.

In 230 B.C., when the state was dissolved by Qin Shi Huang, founder of the Qin Dynasty, Zhang spent his entire family fortune for an assassination attempt on Qin Shi Huang’s life. However, the attempt failed and Zhang was forced to flee to another state.

While a fugitive, young Zhang Liang traveled about. One windy and snowy day, while strolling near the Yishui Bridge, Zhang saw an old man sitting on the bridge.

When he saw Zhang, the old man deliberately dropped his shoe to roll down the bridge, and then asked Zhang Liang to fetch and replace it.

Despite the slippery conditions and being unhappy about the situation, Zhang not only fetched the shoe, but also knelt down and put it back on the old man’s foot.

Seeing Zhang Liang’s respect for elders, the old man smiled and told him that he would be worth teaching. He instructed Zhang to meet him the next morning for a lesson.

The next day, Zhang Liang went to the bridge before dawn, yet he found the old man already there waiting.

The old man angrily scolded him for keeping an elder waiting and told Zhang to come back again the following day.

Finally satisfied, the old man gave Zhang Liang a book and told him, “When you fully understand this book, you will be able serve as a teacher to an emperor. If you need more help from me, I am the yellow rock at the foot of Mount Gucheng.”

According to a classic Chinese folktale, the old man was actually Huang Shigong (黃石公), the Yellow Rock Ancient, and one of the four wise men called the “Four Haos of Mount Shang (商山四皓).”

The book is referred to as The Strategies of Huang Shigong or Tai Gong’s Art of War. After studying the book, Zhang Liang became known for his military strategies and for being adept at managing changing situations.

It is also said that Zhang Liang went to the foot of Mount Gucheng and found a yellow rock at the specified place. There, he built a shrine to the rock and, when he died, the yellow rock was buried with him.

Helping to Establish a Dynasty

Thanks to Zhang Liang’s counsel on political policy and military strategy, Liu Bang won many battles and became the first emperor of the Han Dynasty.

One particular advisement resulted in considerable favor for Liu Bang.

When Liu Bang conquered Qin’s capital, he was attracted by the many valuable treasures and the beautiful women in the palace and wanted to stay and establish himself there

However, Zhang Liang warned Liu Bang that he was risking being perceived as a vulgar person pursuing a luxurious lifestyle and encouraging the wicked to do wicked deeds.

Though reluctant, Liu Bang heeded Zhang’s advice and left the palace. As a result, Liu Bang received the full support of the people of Qin and was eventually able to take the throne as emperor of a newly unified China.

As the situation of the new dynasty became relatively stable, Zhang resigned and took up the practice of Daoism. During this period, Liu Bang rewarded those who had helped found the dynasty and made Zhang Liang the Marquis of Liu.

Only once did Zhang Liang come out of retirement. Zhang opposed Liu Bang’s plan to replace the crown prince with his younger brother.

After resolving the situation in the crown prince’s favor, Zhang Liang left state affairs altogether to devote the rest of his life to the practice of Daoism.

In Zhang Liang’s early years, all his fortune and fame was diminished when the Han State was eliminated by the rise of Qin Shi Huang and the establishment of the Qin Dynasty

Zhang endured going from rich to poor, from duke to fugitive, and from being a hereditary official to a commoner.

However, Zhang Liang was not discouraged by the unsuccessful assassination attempt on Qin Shi Huang. Upon assessing the political situation, he joined Liu Bang and assisted him in defeating the Qin, thereby avenging his native Han state

Once this goal was achieved, Zhang Liang was not attached to power, fame, or luxury, and retired to a life of spiritual growth and enlightenment.

After his death, Zhang Liang was deemed a role model for imperial advisers.