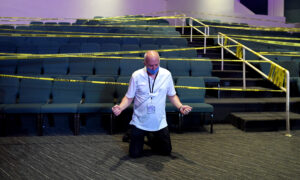 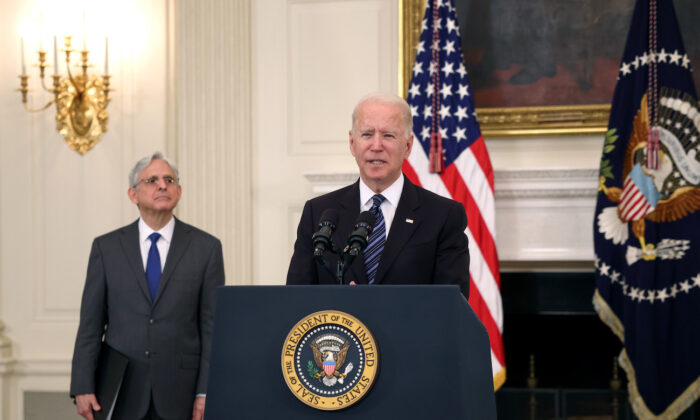 President Joe Biden unveiled new measures on June 23 that he says will address gun violence and violent crime, promising to aggressively pursue gun dealers who willfully break the law and to boost federal funding for local law enforcement amid a rise in homicide rates in the country over the past year.

The first agenda in the administration’s new five-point plan is to “help stem the flow of guns into the hands of those responsible for violence,” including by having a “zero tolerance” policy for gun dealers that violate the law.

As part of the policy, the Bureau of Alcohol, Tobacco, Firearms and Explosives (ATF), an agency of the Justice Department, will seek to revoke the licenses of gun dealers who are found to violate federal law by “willfully” transferring a firearm to a person prohibited from owning one, failing to run a required background check, falsifying records such as a transaction form, failing to respond to a tracing request from the ATF, or refusing to let the ATF conduct an inspection.

“These merchants of death are breaking the law for profit,” Biden said at the White House. “If you willfully sell a gun to someone who’s prohibited, my message to you is this: We’ll find you and we’ll seek your license to sell guns. We’ll make sure you can’t sell death and mayhem on our streets.”

A senior White House official told reporters on June 22 the move “will be a historic policy that will make sure that we hold gun dealers across the country who are contributing to the supply of crime guns accountable.”

The ATF will coordinate with state and local officials to be better informed about which dealers are supplying guns that show up at crime scenes, according to the White House.

“This information may provide valuable leads for ATF investigations and serve as a source of information that helps focus inspection resources on the places that need them most,” according to a White House fact sheet.

The White House noted that homicides increased by 30 percent and gun assaults increased by 8 percent in large cities in 2020, citing figures from a report (pdf) by the Council on Criminal Justice research group. The group said in its report that while there is some “preliminary evidence” to support the suggestion that increased gun sales may have contributed to rising homicides, “more research is required.”

The funding would be drawn from some $350 billion in state and local funding, as well as from $122 billion in school funding—both drawn from the $1.9 trillion “American Rescue Plan” COVID-19 relief package approved in March.

Funds would be used to hire police officers up to levels prior to the CCP (Chinese Communist Party) virus pandemic, invest in technology to make law enforcement more efficient, and invest in community policing, among other efforts. The Treasury Department on June 23 released guidance on how states and localities can use funds from the American Rescue Plan Act for such purposes.

“This is a historic amount of funding that the President is making available to cities and states through the American Rescue Plan to invest in a range of tools to reduce gun violence in their communities and make their communities safer,” a senior White House official told reporters on June 22.

Biden noted on June 23 that “crime historically rises during the summer, and as we emerge from this pandemic, the traditional summer spike may be even more pronounced than it usually would be.”

“This is not a time to turn our backs on law enforcement,” he said.

Biden’s latest efforts build upon earlier gun control actions in April, when he announced an executive order against “ghost guns” and stabilizing braces, and pushed for “red flag” legislation for states. Following Biden’s order, the DOJ in May proposed a rule against “ghost guns”—guns assembled from parts that don’t bear a serial number, thereby making them hard to trace. The rule requires that any build-it-yourself gun kits must have a serial number, and mandates that buyers undergo a background check.

Christopher Stone, director of communications for the National Association for Gun Rights, told The Epoch Times several days after Biden’s April announcement that it’s completely constitutional to assemble your own firearm at home.

“Building your own firearms is an American tradition predating the Second Amendment,” he said.

The DOJ also proposed a rule in June against certain stabilizing braces that effectively make a pistol function like a short-barreled rifle, and introduced model red-flag legislation for states to create laws governing risk-protection orders—orders that would allow courts to temporarily bar people from owning or accessing firearms. The proposals have met with pushback from Second Amendment advocates who say they threaten American’s constitutional rights.