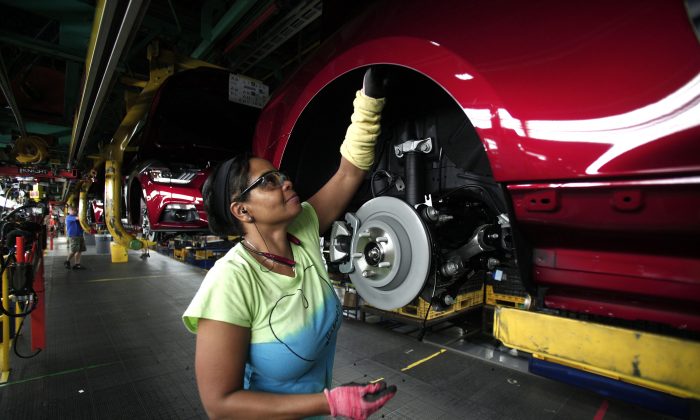 In the long run, however, they warn that additional tariffs on steel and aluminum or automotive products will hurt workers and consumers.

At a hearing on Sept. 5, titled “The Impact of Zero Tariffs on U.S. Autoworkers,” experts who testified before the Senate Health, Education, Labor and Pensions (HELP) committee said they support President Donald Trump’s goal to move towards a zero-tariff policy.

Steel is an important material in automotive manufacturing. According to Alexander, steel makes up 70 percent of the vehicles that Nissan produces in Tennessee and Mississippi, and the cost of steel is up 40 percent since January. This boosts Nissan’s production cost by several thousand dollars, he said.

While there are about 140,000 people producing steel in the United States, there are 17 million Americans working in industries that use steel, he said. Tariffs will destroy more jobs in the steel-use industry than will be added at steel producers, he added.

Stephen Moore, an economist at The Heritage Foundation and former economic adviser to Trump’s 2016 presidential campaign, said in his testimony that he was initially skeptical of Trump’s trade approach. He believes, however, the agreement with Mexico and a handshake deal with European Union are a good start.

“I would say, today, I am less skeptical than I was six or nine months ago,” he said. “So far, it appears that Trump is on a right course.”

Moore expressed optimism that the short-term pain created by tariffs would ultimately bear long-term gain for American companies and workers.

“At the end of the day, I am an optimist, I think this will work out if we move towards the policy of zero tariffs,” he said.

The U.S. automotive industry is healthy, as foreign auto manufacturers flock to Southern states thanks to lower costs and Right to Work laws, Moore said.

While the United States builds almost 12 million cars and light trucks a year, the number of cars produced by domestic car manufacturers in Detroit is down by 3.5 million in the past two decades, Moore said. Over the years, foreign auto manufacturers such as Nissan, Honda, Toyota, and BMW have opened plants in states such as Tennessee, Alabama, Texas and South Carolina and offset that decline.

Trump has called for dropping all tariffs and trade barriers across countries.

“You go tariff-free, you go barrier-free, you go subsidy-free,” Trump said at a press conference after Group of Seven meetings in June. He also said the United States turned into “a piggy bank that everybody’s robbing.” Hence, he still holds firm on special tariffs on foreign autos, steel, and aluminum, declaring the current situation without tariffs a threat to national security.

Trump also instructed the Department of Commerce in May to look into the possibility of imposing 20 to 25 percent tariffs on imported autos and parts. The administration, however, seems to postpone the idea of imposing tariffs on cars due to ongoing negotiations with trading partners.

“If punitive tariffs of 20-25 percent are imposed on auto and auto-parts imports … new vehicle prices will increase by as much as $7,000,” John Bozzella, president and CEO of Association of Global Automakers said in his testimony.

Tariffs as a Tool

The trade war has escalated in recent months, with a number of separate announcements of tariffs on various goods. However, the tariffs imposed so far affect only a “narrow sliver” of the U.S. economy, according to Thea Lee, president of the Economic Policy Institute.

They affect only 0.1 percent of the U.S. gross domestic product and the effect may rise to 0.8 percent at most, if all proposed tariffs are implemented, Lee said in her testimony.

“Tariffs, used strategically, can be an important and useful tool,” she argued, adding that steel tariffs are useful in addressing a problem of global excess capacity.

However, she criticized the White House for not having a clear strategy and an ultimate goal in its tariff policies, and claimed that the current tariff regime has failed to have the desired effects. She suggested the administration should work together with key allies to address currency manipulation and other unfair trade practices by China.

Over a million U.S. manufacturing jobs were directly eliminated between 2000 and 2007 as a result of China’s increasing trade penetration into the United States, according to a research by the M.I.T. economists.

The economists also estimate that as much as 40 percent of the drop in U.S. manufacturing during that time is attributable to the trade shock following China’s ascension to the World Trade Organization in 2001.