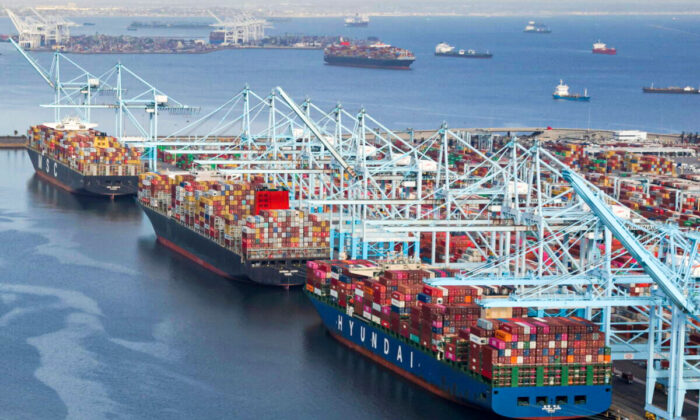 Shipping containers are unloaded from ships at a container terminal at the Port of Long Beach-Port of Los Angeles complex in Los Angeles, Calif., on April 7, 2021. (Lucy Nicholson/Reuters)
By Jill McLaughlin

Officials have declared an end to the backup of container ships at Southern California ports that lasted for more than two years after shipping delays at the ports caused nationwide supply-chain snarls.

The Marine Exchange of Southern California reported cargo ship backups had fallen to zero beginning Nov. 22—a stark difference from one year ago when the ports of Los Angeles and Long Beach were bogged down with 81 container ships.

“It’s time to move into a different phase of operations,” Kip Louttit, executive director of the Marine Exchange said in a release.

Backups persisted for 25 months starting in October 2020, peaking at 109 in January as pandemic-fueled spending flooded the busy ports with goods from Asia. Truckers and rail carriers struggled to process thousands of containers, and warehouses were filled throughout the state.

Containers piled up at the ports, along local neighborhood streets, and at temporary holding sites during the crisis. California implemented several measures, easing trucking rules and expanding licensing hours. The state also leased out property to companies for container storage.

President Joe Biden also called for expanded hours at the ports but truckers and operators showed little interest in picking up goods during the extra shifts, a port spokesman told The Epoch Times.

As the problems persisted, the ports adopted a new queuing system for incoming cargo carriers in November 2021 to improve safety and air quality in the region.

The tactic didn’t solve the backups but alleviated traffic near the Los Angeles-area ports, cutting down on some smog-inducing emissions that were pouring from waiting ships.

But with more than 100 ships parked off the shores and engines idling, the region saw more than 40-percent increase in emissions during the shipping crisis, the South Coast Air Quality Management District said in a statement.

The new system allowed ships to call the ports ahead of time to be assigned a berthing time. As a result, ships spread out across the Pacific Ocean as they waited, with many choosing to stand by off the coast of Mexico.

Many shippers also chose to reroute to other U.S. ports during the height of the crisis, increasing delays at the East and Gulf ports that continued this month.

The largest backlog was off the Port of Savannah, Georgia, with 28 ships in line, the site reported.