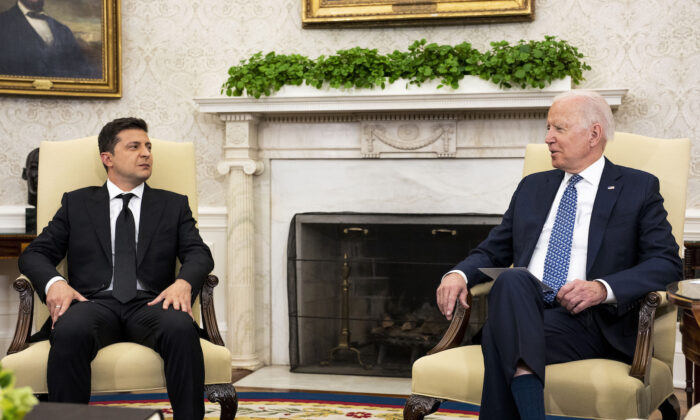 Ukrainian President Volodymyr Zelenskyy said on March 30 that he spoke with President Joe Biden regarding the weeks-long Ukraine–Russia conflict.

The two “talked about specific defensive support, a new package of enhanced sanctions, macro-financial and humanitarian aid,” Zelenskyy wrote on social media. He said he also provided an “assessment of the situation on the battlefield and at the negotiating table.”

Nearly five weeks into an invasion in which it hasn’t been able to capture most major cities, Russia said on March 29 that it would curtail operations near Kyiv and the northern city of Chernihiv “to increase mutual trust” for peace talks.

Intensified bombardment could be heard in Kyiv on the morning of March 30, in suburbs where Ukrainian forces have regained territory in recent days. The capital itself wasn’t hit, but windows rattled from the relentless artillery on its outskirts.

In a statement, the White House also said Biden and Zelenskyy “discussed how the United States is working around the clock to fulfill the main security assistance requests by Ukraine, the critical effects those weapons have had on the conflict, and continued efforts by the United States with allies and partners to identify additional capabilities to help the Ukrainian military.”

“In addition, President Biden informed President Zelenskyy that the United States intends to provide the Ukrainian government with $500 million in direct budgetary aid,” the statement said.

This week, Ukraine and Western leaders had cautioned that Moscow’s apparent peace gesture at the talks in Istanbul was a cover for reorganizing forces that had failed to take Kyiv.

Russia’s defense ministry said on March 30 that its forces were regrouping near Kyiv and Chernihiv to focus on what it described as the liberation of the breakaway eastern Donbas region.

During a press briefing, ministry spokesperson Maj. Gen. Igor Konashenkov said that “planned regrouping of troops is taking place in Kyiv and Chernihiv directions,” according to Russian state-run media.

White House communications director Kate Bedingfield told a White House news conference on March 29, “I think we should be clear-eyed about the reality of what’s happening on the ground, and no one should be fooled by Russia’s announcements.”

A movement of Russian troops is “a redeployment and not a withdrawal, and the world should be prepared for a major offensive against other areas of Ukraine,” she said.