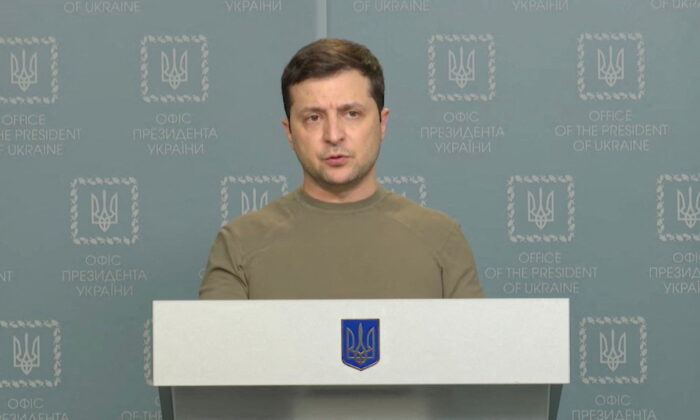 Zelensky: I Am ‘Target Number One,’ My Family is ‘Number Two’

Ukrainian President Volodymyr Zelensky on Friday morning addressed his country and said he is “target number one” and his family is “target number two” for Russian troops, while later saying that the Biden administration is “watching from a distance” as the invasion unfolds.

“I know that a lot of misinformation and rumors are being spread now,” Zelensky said in a video, uploaded online. “In particular, it is claimed that I have left Kyiv. I remain in the capital; I am staying with my people. My family is not a traitor, but a citizen of Ukraine.”

Zelensky added: “According to our information, the enemy marked me as target number one. My family is the number two goal. They want to destroy Ukraine politically by destroying the Head of State. We have information that enemy sabotage groups have entered Kyiv. … I am staying in the government quarter together with others.”

On Friday, Russian missiles pounded Kyiv as families cowered in shelters and authorities told residents to prepare Molotov cocktails to defend Ukraine’s capital from an assault that the mayor said had already begun with saboteurs in the city.

Moscow claimed to have captured the Hostomel airfield northwest of the capital, a vital staging post for a planned assault on Kyiv, which has been fought over since the first hours of the war. This could not immediately be confirmed and the Ukrainian authorities reported heavy fighting there.

In another address, uploaded online, Zelensky appeared to criticize the United States and President Joe Biden.

“This morning, we are defending our country alone. Just like yesterday, the most powerful country in the world looked on from a distance,” he said. “Russia was hit with sanctions yesterday, but these are not enough to get these foreign troops off our soil. Only through solidarity and determination can this be achieved.”

In a speech on Thursday, Biden said he is not going to send U.S. troops to Ukraine, which is not a NATO member. Some analysts have said the United States doesn’t seek to get into a direct conflict with Russia as both nations possess significant numbers of nuclear weapons.

Ahead of Russia’s invasion, Russian President Vladimir Putin issued a speech appearing to threaten other nations with nuclear weapons if they get involved. He did not explicitly say whether he would consider using nuclear weapons.

“To anyone who would consider interfering from outside: If you do, you will face consequences greater than any you have faced in history. All the relevant decisions have been taken. I hope you hear me,” Putin said.

Air raid sirens wailed over the capital of three million people, where some residents sheltered in underground metro stations.

“The city has gone into a defensive phase. Shots and explosions are ringing out in some neighborhoods. Saboteurs have already entered Kyiv,” said Kyiv’s mayor, former world heavyweight boxing champion Vitali Klitschko. “The enemy wants to put the capital on its knees and destroy us.”