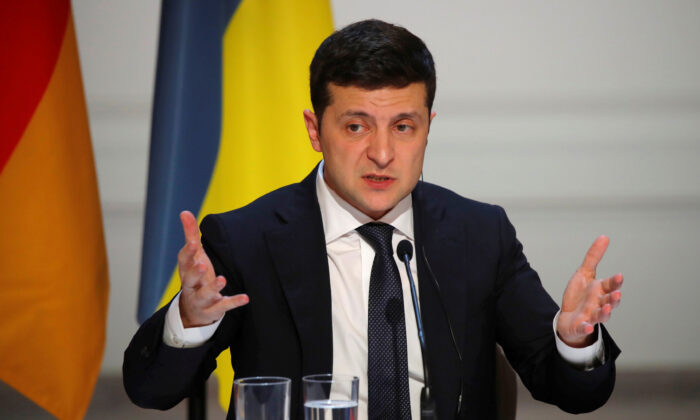 Ukraine's President Volodymyr Zelenskyy speaks during a press conference after a summit on Ukraine at the Elysee Palace, in Paris, on Dec. 9, 2019. (Charles Platiau/AFP via Getty Images)
Middle East

Ukraine President Volodymyr Zelensky demanded that Iran punish those responsible for shooting down a Ukrainian plane that killed all 176 on board after the regime admitted that its armed forces shot down the jetliner.

“Even before the completion of the work by the international commission, Iran has pleaded guilty to shooting down the Ukrainian plane,” Zelensky said in a statement on Saturday. “However, we insist on full admission of guilt. We expect Iran to assure of willingness to conduct a full and open investigation, bring those responsible to justice, return the bodies of the deceased, pay compensation, and make an official apology through diplomatic channels.”

This morning brings the truth.
Ukraine insists on a full admission of guilt. We expect Iran to bring those responsible to justice, return the bodies, pay compensation and issue an official apology. The investigation must be full, open & continue without delays or obstacles.

The crash took place on Wednesday on the outskirts of Tehran, Iran, shortly after it took off from Tehran’s Imam Khomeini Airport, and just hours after Iran launched a barrage of missiles at U.S. forces.

The plane, operated by Ukrainian International Airlines, was en route to the Ukrainian capital of Kyiv and was carrying 167 passengers and nine crew members from several countries, including 82 Iranians, at least 63 Canadians, and 11 Ukrainians, according to officials. There were no survivors.

The Boeing 737 had flown close to a sensitive military site belonging to Iran’s Islamic Revolutionary Guard Corps and was shot down due to human error, the Iranian military said on Saturday morning in a statement read on state TV.

In a statement, Iran President Hassan Rouhani expressed condolences to the families of the victims and said that the Ministry of Foreign Affairs will help to identify and return the bodies, adding that Iran will “take all necessary measures to compensate” the victims’ families. He also said an investigation is needed to prosecute the perpetrators.

However, Rouhani also blamed the United States for the deaths, saying the Iranian military was on “full alert” due to the “atmosphere of threats and intimidation” which led the regime to make a “human error and mistaken shooting.”

On Friday, Ukraine’s Minister of Foreign Affairs Vadym Prystaiko said Ukraine got access to the black boxes and recordings of conversations between the dispatchers of the flight control center at the airport in Tehran and the Ukrainian pilots. According to Reuters, Zelensky and French President Emmanuel Macron agreed on Saturday that French specialists would help decode the plane’s black boxes.

An international coordination and response group for the families of victims of flight PS 752—formed by Canada, Ukraine, Sweden, Afghanistan, and the United Kingdom on Friday —also demanded “a full and transparent investigation into the causes of the fatal crash.”

Today, we convened the first call of the International Coordination and Response Group for families of victims of PS752. We will work closely together as we move forward. @VPrystaiko @AnnLinde @IdreesZaman @DominicRaab pic.twitter.com/NWsswcXDXh

The plane crash became the most deadly incident amid the heightened tensions with the United States.

The timeline of the major events are recounted below in chronological order.

Between Dec. 27 and Dec. 30: U.S. forces conducted airstrikes against five Kataib Hezbollah targets including three in Western Iraq and two in Eastern Syria.

Between Dec. 31 and Jan. 1, 2020: Iran-backed militias stormed the U.S. Embassy in Baghdad, breaking through the first layer of the compound before being repelled by Iraqi security forces. The breach was reportedly conducted by the Popular Mobilization Forces, an umbrella body for dozens of Iran-backed militia groups.

Jan. 7: Iran launched more than a dozen ballistic missiles against U.S. and coalition forces in Iraq and no causalities were reported. The Ukrainian air plane was shot down hours later.

In response, Trump said Iran appeared “be standing down” and called for additional economic sanctions. He also called on NATO to be more involved in Middle East.

Mimi Nguyen contributed to this report.