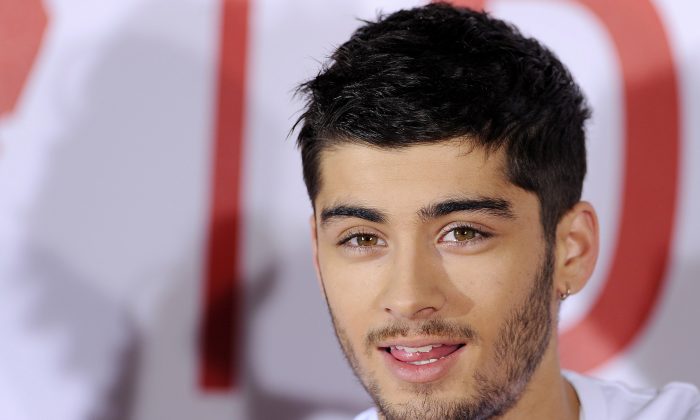 Zayn Malik’s announcement that he is quitting boy band One Direction has triggered an unsettling amount of mostly teenage girls to tweet they’ll kill themselves over the move. (Stuart C. Wilson/Getty Images)
Entertainment

A Twitter trend #Zayninprison is implying that One Direction star Zayn Malik has been imprisoned but it’s not true.

The hashtag was created on Wednesday or Thursday, and it went viral on the social media website. As of Thursday evening, it was the top worldwide trend on Twitter.

A number of users were claiming that he was imprisoned for rape.

Added another, “They would eat him like candy in prison #ZaynInPrison.”

Wrote another, “#ZaynInPrison I wanna hear you make a song out of that!!”

“Lol but who started this trend #ZaynInPrison,” another person said.

The claims are false because he wasn’t arrested, jailed, and never went to court for anything of the sort. There’s also no victim named.

There’s also no local or national media coverage about a rape or imprisonment.

A few weeks ago, there was a Twitter hoax that said Malik had died. He’s obviously still alive.

This week, a video surfaced of Malik and fellow One Direction star Louis Tomlinson were caught on video allegedly smoking marijuana. The trend about him going to prison is likely was in reaction to the video.

Harry Styles, a member of the group, is reportedly furious over the video.

“This should be one of the biggest weeks of the band’s career with the launch of their UK stadium tour,” a source close to Styles told the Mirror. “Instead it has been taken over by this controversy. Harry thinks it was a stupid and reckless thing for Louis to allow to be filmed in the first place.”

The source, who was not named, continued: “Despite Harry’s reputation, he’s incredibly professional and mature, and not into these sorts of antics.”

Another source said that Tomlinson has been having a hard time after the video leaked.

“He was up checking his phone to see the reaction,” the source told the paper. “He understands the whole world is talking and he is trying to work out how to limit the damage.”