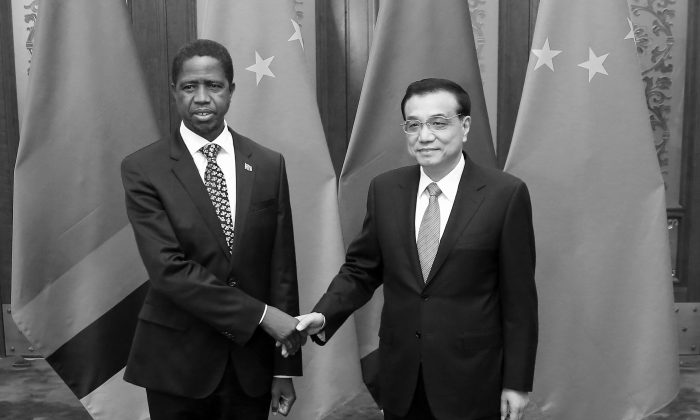 The scandal surrounding Scottish actor Louise Linton and her memoir of the year spent in Africa—a book so problematic that the inconsistencies and the “white savior” delusions of “In Congo’s Shadow” are too numerous to debate here—has put Zambia at the center of international attention. However, it’s not the attention Zambians want, in a country that rarely pops up on the West’s radar.

While Linton’s book sparked a media flurry as well as the viral #LintonLies hashtag, the real scandal Zambians care about involves the struggles of a comparatively peaceful and stable nation, whose real challenges go overlooked while the world focuses its gaze on attention-seeking socialites.

Zambia is at an economic and political crossroads that serves to underscore the importance of identity in the developing world.

Zambia is at an economic and political crossroads that serves to underscore the importance of identity in the developing world. The Zambian experience—a multiplicity of complex experiences, to be more precise—raises fundamental questions about extracting African resources, the double-edged sword that is China’s influential direct foreign investment in developing African nations, and how to achieve meaningful sustainability.

The United Nations World Food Program just announced it needs $730 million in the coming year to address drought and famine relief in seven countries, including hard-hit Zambia. That’s as word comes that global food prices have hit a four-year high, sparking unrest in neighboring Zimbabwe and across the afflicted southern continent. For Zambia, which shares a Zambezi River Basin border with Robert Mugabe’s increasingly restive nation, false promises that there will be no hunger are only one problem.

The Zambezi is the major hydropower resource in southern Africa, and critical to Zambia’s economy. Electricity generated by the nation’s hydropower stations is critical to production in the copper mines that are the source of Zambia’s prosperity and stability. Just as the water that once flowed mightily through the dam has slowed to a trickle, so has the Chinese economy—and Chinese investment in copper.

The Chambishi copper belt, near the Democratic Republic of Congo border as it juts southward into Zambian territory, is a tragic example of Zambia’s current struggle to keep its economy afloat. The mine is “the project that symbolizes Sino-Africa cooperation,” according to the China Nonferrous Metal Mining Group, which was awarded the bid for China’s largest nonferrous overseas mine in the world in 1998.

Production began nearly 15 years ago, and with it came jobs, shopping malls, and dreams backed by development. But the steep decline in Chinese demand—a drop of 70 percent, as of early this year—within the overall context of the global commodities slowdown has left Zambia’s dreams in the dust.

And dust it is. A modest recovery in the market, as well as the decimated value of the Zambian kwacha, can’t reverse the climate impacts of the drought—or the long-term environmental damage caused by cooperation with China’s profit-driven motives. That dust clings to the miners who have breathed it in facilities that human rights organizations have exposed for labor practices deemed unsafe and abusive. China’s Nonferrous Mining Corporation managed ran afoul even of Zambia’s rather unregulated extractive industry, seeing its license suspended by the country’s environmental agency.

Zambia’s industrial pollution problems are merely a reflection of China’s own disdain for the environment. As a Sierra Club investigation reported, a mere 21 business tycoons, active in the manufacturing industries and with wide reaching interests, are responsible for 10 percent of China’s CO2 emissions.

When Jianlong Group controversially bought the rights to exploit with Chinese workers the so-called Black Mountain near Kitwe, thousands of people who were depending on the mountain for their livelihood rose up in anger, only to be put down by governmental security forces. The arrival of the Chinese company is bound to send crime rates soaring, as poverty will only deepen in the area, while the environment is also sure to suffer.

As Zambians seek to recover from the current economic trough, the sense of loss extends well beyond the immediate impacts of food aid and double-digit unemployment. The loss of Zambia’s identity as a model of African success—as a peaceful, stable, and democratic oasis aligned with a progressive global horizon—impacts immediate political life.

General elections are set for Aug. 11 in Zambia, and the real scandal that Zambians care about is what has happened to their nation under President Edgar Lungu, who faces a challenge from opposition front-runner Hakainde Hichilema. Charges of irregularities ahead of the elections have, in the words of one political analyst, placed Zambia’s “enviable record of 25 years of peaceful democratic elections” under a well-deserved scrutiny that is fueled by high-profile challenges to press freedoms, concerns over military intervention in the looming elections, and charges of irregularities in ballots and voter registration rolls.

The truth is that Zambia’s economic interests are inextricably linked with China’s own, and under the leadership of Lungu—as environmental protections were disregarded, climate impacts became severe, and prosperity linked to Chinese commodity markets became a mirage—that economy has driven an unrest that threatens the nation. Confidence in Lungu’s leadership has hit a low that won’t be resolved by a hard-line government that threatens to crush dissent, nor by appeals from foreign governments and international agencies with well-intended demands for press protections and economic reforms.

The threats to ordinary Zambians, who are turning their anger toward their government and each other as they seek relief, are rooted in more than one dimension. The solutions are equally complex, and they lie in a clear-eyed assessment of Zambia’s over-reliance on an extraction-based economy, propped up by Chinese investment and crippled by climate impacts, that has damaged its identity and its environment.