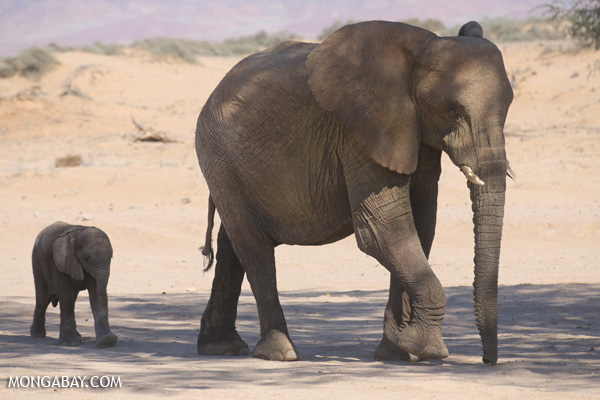 Desert elephants in Namibia. Photo by: Rhett A. Butler.
Environment

After 20 months, Zambia has lifted its ban on hunting, allowing trophy hunters to target numerous species in the wildlife-rich country including elephants. The announcement was made by the country’s Tourism and Art’s Minister, Jean Kapata, who stated that the ban had resulted in a loss of revenue to the Zambia Wild Life Authority (ZAWA).

The ban on hunting still extends to the country’s big cats, however. The government will survey their numbers and propose sustainability measures before any hunting would begin. Zambia is home to lions, cheetahs, and leopards.

The ban proved controversial in Zambia and led to the downfall of the previous Tourism and Arts Minister, Sylvia Masebo. After canceling already-awarded hunting concessions, Masebo was brought before a tribunal and found guilty of abuse of power. She was fired by current President Sata for lying under oath when she testified that Sata told her to cancel the hunting concessions.

Trophy hunting has long been a contentious issue in sub-Saharan Africa. A recent decision to allow a trophy hunter to kill a black rhino—a Critically Endangered species—in Namibia sparked a number of major media stories and a social media war. Namibia faced another controversy when it allowed trophy hunters to kill desert elephants, which are only found in Namibia and Mali.

Trophy hunters often argue that by paying large rates to shoot and kill Africa’s animals, they bring in much-needed revenue for local communities and conservation work. However, some conservationists argue that in the midst of a massive poaching crisis—largely targeting elephants and rhinos—as well as rapidly declining populations of everything from lions to African buffalo, trophy hunting not only adds another threat to species survival, but sends the wrong message to the public. A recent study found that Africa’s big mammals have been halved in just 40 years