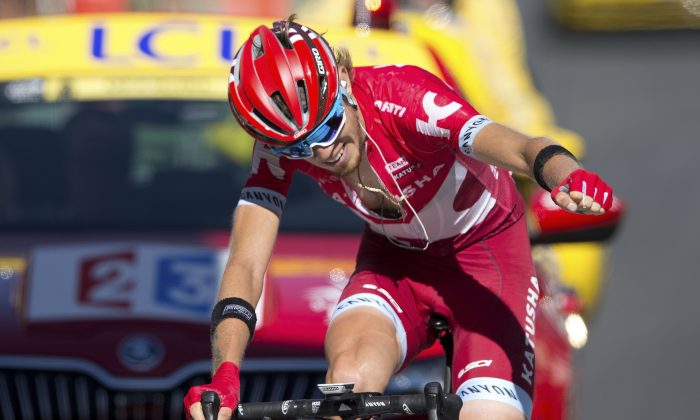 Katusha’s Ilnur Zakarin won his first Tour de France stage in Stage 17, attacking on the Hors Categorie climb to Finhaut-Emosson, Switzerland. The Russian rider launched a pair of attacks, first to shake the remnants of the breakaway group about 6.5 km from the summit, and again until he had shaken off Colombian rider Jarlinson Pantano, trying to get his second Tour stage win on Colombian Independence Day.

Zakarin was the second rider to win his first Tour stage this year (Pantano being the other) and only the second member of Team Katusha to win a Tour stage since 2009.

Zakarin nearly missed the Tour this year after crashing in the Giro d’Italia on May 27 and breaking his collarbone.

“After I crashed at the Giro … I quickly underwent a surgery. I didn’t miss any time in my rehabilitation so I could stick to the plan to come to the Tour de France,” Zakarin told LeTour.com “During the first two weeks, I didn’t have any other goal but stay out of trouble and work for Alexander Kristoff. The goal was to win a stage in the third week.

“We’re very happy we made it. In the future I want to win a Grand Tour and the Tour de France has my priority. It’s the most important race of the year.”

While Zakarin and Pantano were fighting for a Stage win, Sky’s Chris Froome was busy extending his lead over his rivals, coming one step closer to winning his third Tour de France. Astana again offered the only real challenge to Sky as a team, Sending Vincenzo Nibali and Deigo Rosa to the front on the final climb to lift the pace, hoping to create opportunities for their team leader, Fabio Aru.

Richie Porte attacked late in the stage and dropped all the GC contenders—except Froome. Porte advanced from seventh to sixth in GC; Froome extended his lead over the entire field, if only by eight or ten seconds.

Stage 17 of the 2016 Tour de France was the first in the Alps, and one of the hardest of the Alpine stages. The 184-km stage from Berne to Finhaut-Emosson included two Cat 3 climbs, and finished with a Cat 1 leading into an Hors Categorie mountaintop finish.

The final half of the final climb averaged 9.7 percent incline, with the final kilometer averaging 12.3 percent. On top of the length and steepness of the climbs was the altitude—the stage finished at 6400 feet above sea level.

The stage seemed perfectly suited to Movistar team leader Nairo Quintana, who had promised since the start of the Tour that he would be attacking in the final week. The Colombian climber lives and trains at 10;000 feet, so the altitude, while possibly an issue for others, should have been a benefit to him.

Quintana needed to attack. he came in the 2016 Tour as one of three favorites, possibly the best positioned to challenge defending champion Chris Froome of Team Sky. However the Movistar rider had only made a few tentative attacks through the first two weeks of the race, and entered the final week three minutes behind Chris Froome.

The stage started with a sort of disaster for Movistar and Nairo Quintana. Giant-Alpecin’s Warren Barguil, Cofidis’ Borut Bozic, and Movistar’s Jon Izaguirre tangled in the first two km of the stage, leaving Izaguirre with a serious collarbone injury, forcing him to withdraw. Izaguirre’s brother Gorka had already withdrawn, leaving Movistar with only seven riders—that is, six to protect Quintana through the mountain stages.

The pace was high from the first wave of the flag, with the peloton pushing an average speed of 52 kph (32 mph) and swallowing up every attack. Finally after 70 km of racing a group of four got away; this group swelled into a group of 11, chased by a smaller group of eight. After another 20 km, the breakaway stabilized with 14 riders, with most of the chasers giving up and falling back to the peloton.

As is the way of stage races in the later weeks, there were essentially two races taking place simultaneously: the race for the stage win, contested among the 14 leaders, and the race for time in the General Classification.

The breakaway was allowed to ride away once it got established, eventually opening a gap of over thirteen minutes on the Yellow Jersey group. The breakaway group included Tinkoff’s Peter Sagan and Rafal Majka: the former out for green jersey points, the latter looking to gain King of the Mountain credit. Sagan helped push the pace in the breakaway group, making sure that his team mate had the best possible chance to summit every climb in the lead, until Sagan cracked halfway up the Cat 1 Col de la Forclaz.

Tony Gallopin of Lotto Soudal was first to attack the break, halfway up the Forclaz climb; followed by Astana’s Alexy Lutsenko. Gallopin couldn’t match the Astana rider’s pace and eventually dropped all the way back to the main peloton. Lutsenko didn’t have the legs to stay away solo and got reeled in near the top of the climb. Rafal Majka made his move just before the summit to bag the KOM points.

Rafal Majka had gapped the break at the Forclaz summit. Iam’s Jarlinson Pantano caught up with the Tinkoff rider on the descent. Ilnur Zakarin waited until the start of the final climb to bridge across to this pair. Zakarin attacked 6.5 km from the finish; Majka couldn’t follow, but Pantano did. Zakarin waited another 500 meters and attacked again, this time gapping the Iam rider.

Zakarin motored on to the stage win, with Pantano 55 seconds behind. Majka finished a respectable third on the stage.

Fight for the GC Podium

The race for time in the General Classification was at least as exciting as the race for the stage win with more attacks from more riders.

At first it was Astana with Nibali and Rosa lifting the pace on the Forclaz, and keeping it high, to shrink the peloton as much as possible. Sky managed to hang on with five riders into the final climb, but only Alejandro Valverde of Movistar managed to stay with his team leader Nairo Quintana.

By the time Vincenzo Nibali pulled off halfway up the final climb, the yellow-jersey peloton was down to about 15 riders. Rosa managed to keep pushing for another kilometer before he cracked completely, leaving Aru on his own. Froome still had three riders, Sergio Henao, Mikel Nieve, and Wouter Poels, shepherding him along.

Valverde made an attack about six km from the summit, which Sky covered. Valverde made a second acceleration, which dropped Henao, but Poels and Nieve were able to follow. The effort also burned Valverde; he had given his all to isolate Froome, but failed. Quintana was now alone in the lead group.

Etixx-Quickstep’s Dan Martin was next to attack, about five km from the finish. No one bothered to follow him, as he was too far down in GC, but the peloton accelerated slightly, just enough to drop Valverde. Poels and Nieve reeled in Martin at the 4K banner.

BMC’s Richie Porte attacked about 2000 meters from the finish line, where the slope was about ten percent. Quintana followed opening space between himself and Froome. Froome was down to two team mates. Wouter Poels chased after the pair. Once Poels caught Quintana, Froome bridged across.

Fabio Aru attacked as Poels was chasing Quintana, leaving Froome behind, but Froome went back by the Astana rider on his way up to Richie Porte. Dan Martin couldn’t hold the pace and went out the back, as did Trek’s Bauke Mollema and Katusha’s Joachim Rodriguez.

Froome and Poels caught Quintana, and then opened a small gap on the Movistar leader. Seeing this, Froome made his first attack. Quintana covered the attack; Poels followed along after a few seconds. As soon as Poels arrived, Froome attacked again, this time dropping the Movistar leader for good.

Froome kept pushing until he caught Richie Porte about 1200 meters from the summit. he was content to finish the stage on Porte’s wheel, losing no time to anyone on the stage.

Aru, and a few GC contenders: Adam Yates (Orica-BikeExchange,) Romain Bardet (Ag2R,) and Louis Meintjes (Lampre) caught Quintana 1100 meters out. As this group passed under the 800-meter banner, the Movistar rider made one last attempt to cross over to Porte and Froome, but couldn’t gap the group.

Best Young Rider Adam Yates attacked about 400 meters out; Romain Bardet caught him and went over the top. Quintana had nothing left at this point; he started drifting back. Yates re-passed Bardet on the way to the line, and finished third in the GC group, holding on to his third place overall.

Bardet, Aru, and Louis Meintjes, second in Best Young Rider points, all finished ahead of Quintana.

Aru advanced from tenth to eighth in the General Classification. Movistar’s Alejando Valverde dropped from fifth to seventh, letting Romain Bardet and Richie Porte each advance one spot. Porte is now within 12 seconds of Romain Bardet, but a full minute behind Quintana in fourth and 1:34 out of third place, held by Best Young Rider Adam Yates.

Bauke Mollema held onto second in GC but lost 40 seconds. He has 26 seconds on Adam Yates.

Nairo Quintana lost 28 seconds to Chris Froome. he held onto fourth place but is now 3:27 behind, with only three stages left—and one of them is a mountain time trial.

Stage 18 could really shake up the General Classification. Richie Porte has been climbing better than anyone in the race; if he can turn in a good performance, he could easily advance into a podium position.

Chris Froome was by far the best of the GC contender in the first time trial, Stage 13, and has been climbing excellently. There is no reason not to think he will turn in another stellar performance; it is hard to imagine that he could have such a bad day that he would lose the yellow jersey.

Nairo Quintana is not noted as an exceptional time trialist. There is no hope that he could make up three-and-a-half minutes out of Froome in this stage; in fact, he would be more likely to drop back further.