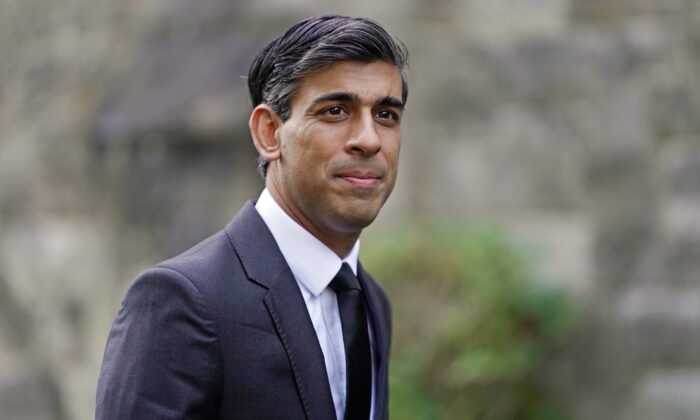 Chancellor of the Exchequer Rishi Sunak arrives for the funeral of James Brokenshire at St. John The Evangelist church in Bexley, southeast London, on Oct. 21, 2021. (Stefan Rousseau/PA)
UK

Chancellor Nadhim Zahawi. has been knocked out of the contest for the leadership of the Conservative Party, with his predecessor, Rishi Sunak, leading the field after the first round of voting by Tory MPs on July 13.

Zahawi and former Health Secretary Jeremy Hunt both failed to reach the 30 votes necessary to make it through to Thursday’s second round of the contest to find a replacement for Boris Johnson, who resigned as Britain’s prime minister last week.

Eight of the original 11 leadership hopefuls were on Wednesday’s ballot and Sunak leads the field with 88 votes, followed by trade minister Penny Mordaunt, who got 67.

Foreign Secretary Liz Truss, who has maintained a tough stance against Russia since the invasion of Ukraine, got 50 and former equalities minister Kemi Badenoch got 40.

The chair of the Foreign Affairs Committee, Tom Tugendhat, and Attorney General Suella Braverman both sneaked through, with 37 and 32 votes respectively.

Choice Between 2 Candidates in August

There will be a further ballot on Thursday and possibly another on July 21.

The final two will make it onto a ballot paper which will be sent out to members of the Conservative Party who will then choose the winner, who will be announced on Sept. 5.

In the summer of 2019, Johnson beat Jeremy Hunt on the ballot and therefore became prime minister, replacing Theresa May.

He then won a landslide election in December 2019 but Johnson resigned last week 48 hours after Sunak and former Health Secretary Sajid Javid started an avalanche of ministerial resignations which fatally undermined Johnson’s position in 10 Downing Street.

Johnson’s position, which was already weak after he was fined by the police over partygate, was made untenable by revelations about deputy government whip Chris Pincher.

Sunak is the only one of the candidates who opposes immediate tax cuts, arguing his self-described “common sense Thatcherism” approach is a more responsible way toward a low-tax economy.

Rivals have criticised Sunak over raised taxes following the COVID-19 pandemic and Jacob Rees-Mogg called him a “left-wing chancellor.”

Sir Mike Penning resigned as vice-chair of the Conservative Party on Wednesday, in order to campaign for Mordaunt.

He told Sky News, “Penny has all the attributes that we’re looking for now, she’s very down to earth, she’s served her country as defence secretary and in the Royal Navy, and particularly in my constituency she will go down very well.”