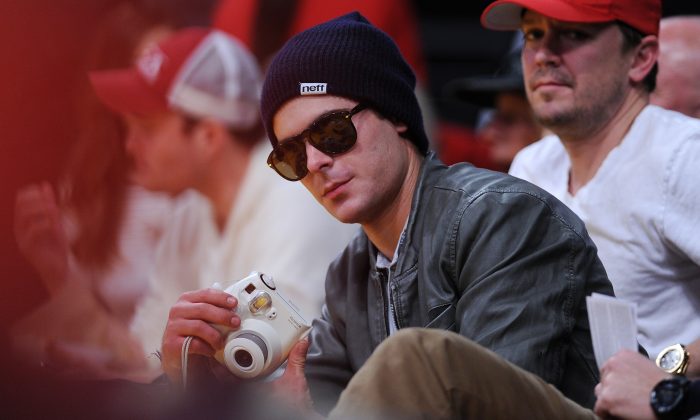 It’s not visible in this photo, but Zac Efron (pictured with glasses and beanie) had a blue chip around his neck. (ROBYN BECK/AFP/Getty Images)
Entertainment

Zac Efron, who has been battling substance abuse issues in recent years, was seen at a Los Angeles Lakers game wearing a AA chip around his neck–about a month after he apparently broke his jaw and had it wired shut after reportedly slipping in a water puddle.

The chip around his neck means that he’s been sober for at least six months.

The blue chip is given out to people who have managed to stay clean for half a year. If he stays another month sober, he’ll get a copper chip.

Earlier this year, Efron admitted that he was carrying out two rehab stints for his addiction to drugs and alcohol.

He has been rumored to be getting help from his girlfriend, Lily Collins.

“Lily is the perfect girl for Zac to be dating right now,” a source told Hollywood Life. “She’s young, gorgeous and smart – but more than anything, she doesn’t drink or use drugs. Zac knows if he wants to save his career and his life, he needs to stay sober and it’s making his transition a lot easier to be dating someone like Lily.”

Efron also had his jaw wired shut after allegedly slipping in a puddle of water.

“She makes him healthy smoothies he can drink through the wire and she’s really good emotional support for him right now,” a source told Radar Online. “Zac is so grateful for Lily. She’s being so sweet with him and is going above and beyond to take care of him.”