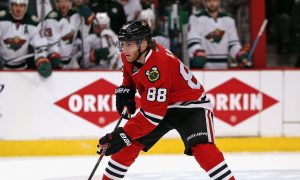 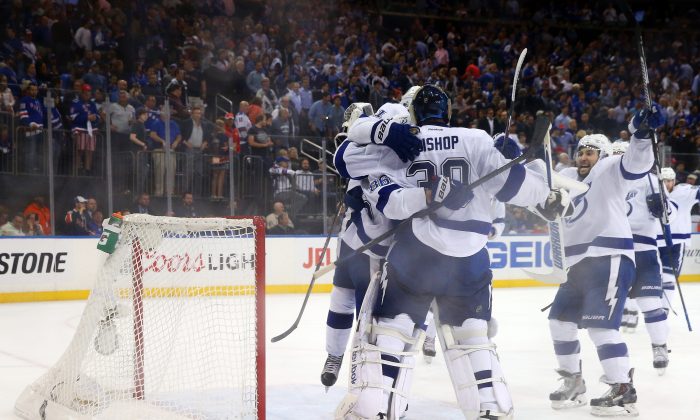 Ben Bishop of the Tampa Bay Lightning celebrates with his teammates after blanking the New York Rangers in Game 7 at Madison Square Garden on May 29, 2015 in New York City. The Lightning take on the Chicago Blackhawks in the Stanley Cup final. (Elsa/Getty Images)
Canadian Content

The Tampa Bay Lightning have a saviour in Steve Yzerman. After hitting near rock-bottom, the franchise is back to the Promised Land 11 years after winning their first Stanley Cup. After a much needed ownership change, Yzerman’s touch has transformed a good team into a potential perennial Cup contender.

After an extended 2004 Stanley Cup hangover, trouble really began when the team was sold in 2008 to Oren Koules and former NHLer Len Barrie, who had found success owning and operating the Bear Mountain golf resort in British Columbia.

The team slid from mediocrity to hopelessness finishing with a pitiful 24–40–18 mark, good for last place in the Southeast Division. The only good thing about the 2008-09 season was the debut of Steven Stamkos for the Lightning. But there were storm clouds brewing off the ice.

The two owners, Koules and Barrie, began squabbling about the direction of the team. The main issue was that Koules wanted to trade star player Vincent Lecavalier in order to cut costs. Barrie wanted to keep him and build the team around the superstar.

It got so bad that NHL commissioner Gary Bettman had to intervene and negotiate a truce between the two sparring owners.

The turning point upwards started during the 2009-10 season when Jeff Vinik purchased the Lightning from Koules and Barrie. Although the Lightning missed the playoffs, Stamkos was emerging as a superstar. He shared the Rocket Richard trophy with Sidney Crosby with each tallying 51 goals.

The ownership change started to filter through the organization and the biggest impact came following the 2009-10 season when Steve Yzerman was hired as general manager. Yzerman was coming off a successful run as executive director of the Canadian men’s hockey team at the 2010 Olympics in Vancouver in which Canada won gold. He is a winner, pure and simple.

Yzerman made changes via trade and free agency while making Stamkos and defenceman Victor Hedman the cornerstones of the franchise. Stamkos and Hedman were No. 1 and No. 2 picks respectively in their draft years.

The results were immediate. The Lightning put up an impressive 46–25–11 record, good for 103 points, up 23 points from the prior season. It was enough to get Tampa Bay into the playoffs for the first time in four years.

The Lightning found success in the playoffs as well, making it all the way to the Eastern Conference Final after upset victories over Pittsburgh and Washington. Even though Tampa Bay lost a heartbreaking seven-game series to Boston, progress was being made in Central Florida.

More Pieces to the Puzzle

Although the Lightning missed the playoffs the following season, Tampa used their improved draft position wisely picking up Nikita Kucherov in the second round. Ondrej Palat was a seventh-round steal, akin to winning the lottery.

Yzerman continued to retool the roster the following year, acquiring goalie Ben Bishop in a trade with Ottawa. He also hired John Cooper as head coach. While not a big name in hockey circles, Cooper had success with Tampa’s AHL affiliate in Norfolk and was familiar with many of the Lightning players.

The 2013-14 season saw the Lightning go through some intense drama. It started in the offseason when Lecavalier signed with Philadelphia as an unrestricted free agent.

It got worse for Tampa in November as Stamkos suffered a broken right tibia that forced him to miss the Olympics in Sochi that February.

The Olympics caused more headaches when Yzerman who was returning as executive director of Team Canada snubbed Martin St. Louis from the team. Feeling betrayed, St. Louis requested a trade, and was granted his wish. Yzerman dealt the disgruntled star to the New York Rangers for Ryan Callahan.

Despite all that, Tampa Bay made the playoffs with a 46–27–9 record. But with No. 1 goalie Ben Bishop suffering a wrist injury that kept him sidelined for the postseason, the true quality of the Bolts remained a mystery. The Lightning were swept by Montreal in the first round.

This season it finally came all together for the Lightning. With the drama of previous seasons in the past, Tampa Bay focused on the task at hand. The Lightning recorded 50 wins for the first time since their Cup-winning 2003-04 season.

Tampa Bay entered the playoffs healthy and determined. They survived a scare from Detroit in the first round, exacted revenge from Montreal in the second round, and eliminated former comrade Martin St. Louis and the Rangers in the Eastern Conference Final.

This is a resilient team that won’t die easily, and now they’ve got a squad that has all the elements of a perennial NHL powerhouse.

The Chicago Blackhawks better be ready. There’s a Lightning warning in the forecast.

Jeremy Wiebe covers the Winnipeg Jets on jetsnation.ca and has also written for various other web sites. Currently residing in Winnipeg, his Twitter is @jstar1973