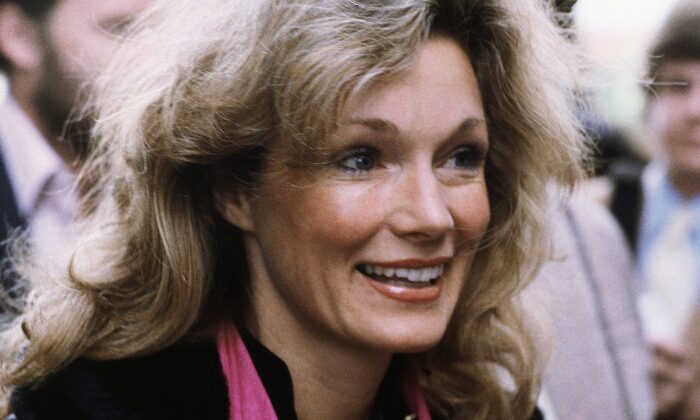 NEW YORK—Yvette Mimieux, the blond and blue-eyed 1960s film star of “Where the Boys Are,” “The Time Machine,” and “Light in the Piazza,” has died. She was 80.

Michelle Bega, a family spokeswoman, said Mimieux died in her sleep of natural causes overnight Monday evening at her home in Los Angeles.

In 1960’s “The Time Machine,” based on H.G. Wells’ 1895 novel, Mimieux starred opposite Rod Taylor as Weena, a member of the peaceful, blond-haired Eloi people in the year 800,000, who don’t realize they’re being bred as food by the underground Morlocks.

That role and others that soon followed made Mimieux one of the 1960s most radiant starlets. The same year, she also starred in the MGM teen movie “Where the Boys Are” as one of four college students on spring break in Florida. Her character, distraught after being sexual assaulted in a motel, walks despondently into traffic.

“I suppose I had a soulful quality,” she told the Washington Post in 1979. “I was often cast as a wounded person, the ‘sensitive’ role.”

Yvette Carmen Mimieux was born on Jan. 8, 1942, in Los Angeles to a French father and a Mexican mother. She was “discovered” at age 15 when publicist Jim Byron, as he told it, spotted her on bridal path from a helicopter while flying over the Hollywood Hills. She and a friend were riding on horseback; Byron landed in front of them and gave her his card. Mimieux began as a model before MGM signed her in 1959.

“The subtle approach is the thing,” Byron told The AP in 1961. “I think we’ve got another Garbo on our hands.”

And for a few years, Mimieux was ubiquitous. Life magazine put her on the cover with the headline: “Warmly Wistful Starlet.” She made eight films before turning 21.

Mimieux starred in four films in 1962, including Vincent Minnelli’s “The Four Horsemen of the Apocalypse” and Guy Green’s “Light in the Piazza.” In the latter, she played the beautiful, mentally handicapped daughter of Olivia de Havilland. On a trip to Italy, Mimieux’s character Clara is pursued by a young Italian in Florence, played by George Hamilton.

Mimieux played a bride in “Toys in the Attic” (1963), an epileptic surfer in “Dr. Kildare” (1964) and a bride in “Joy in the Morning” (1965). She was three times nominated for a Golden Globe, including for her role in the short-lived ABC series “The Most Deadly Game,” from Aaron Spelling. In the 1970s and 1980s, she increasingly appeared in TV movies, some of which she helped write.

Mimieux said television was never the “love affair” she had with film. But she complained about the kinds of roles she was offered, and the one-dimensional type of women that were written. (One of her last notable movies was the 1979 Disney film “The Black Hole.”) So Mimieux retired from show business in her late 40s. Her interests—including archeology, painting, and traveling—always went beyond fame.

Mimieux first married Evan Harland Engber in 1959 before later divorcing. She was married to the film director Stanley Donen, from 1972 to 1985. In 1986, she married the real estate mogul Howard F. Ruby. She’s survived by Ruby and numerous step children.