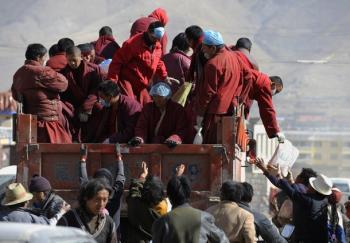 Use of Earthquake Donations Causing Concerns in China

Reports of embezzlement by government officials and inadequate disclosure of “processing fees” and distribution of donations have fueled public mistrust and anger.

According to China’s official news, by 5 p.m. on April 24, the earthquake, which struck Yushu County (Tibetan Autonomous Prefecture) of Qinghai Province in the early morning hours of April 14, has killed 2,203 people. The report said the peak time for rescue operations has passed, and rescuers, including China’s national rescue team, had all left Yushu County.

Zhang Guangrong, the vice governor of Qinghai Province, said at a press conference on April 26 that the study and assessment of a post-disaster reconstruction plan and proposal were underway.

Zhang also announced that as of 5 p.m. on April 25, the Yushu authorities had received nearly 7.5 billion yuan (US$1.1 billion) in donations, including close to 3.5 billion (US$0.51 billion) in monetary funds and 4 billion (US$0.59 billion) worth of disaster relief supplies and goods. He also said that the 544 miles of road in Qinghai disaster area was nearly paralyzed by the quake: Reconstruction will be difficult, and it is unclear how much money will be needed to complete the reconstruction. Detailed figures would be announced at a later time, he said.

The proper use of such a large amount of donations worries many Chinese people and has sparked heated discussions on the Internet. Moreover, since the 2008 Sichuan earthquake, the percentage of the handling fees charged by China’s Red Cross on donations has also triggered much controversy.

It is reported that Chinese charity organizations impose a 20 percent processing fee on donations.

On April 22, Pang Chenmin, vice director of the Rescue Operations Division at the Ministry of Civil Affairs, denied the allegation, saying that social organizations and foundations have to follow the law and carry out disaster relief work according to regulations. Therefore, he contends it would have been impossible for them to ask for 20 percent of the donation money. Pang said that donations are mainly used for reconstruction of houses, schools, hospitals, social welfare, and public facilities in disaster areas.

And rule 27 of the China Charity Federation code says, “According to related state regulations, a certain percentage of management fees can be imposed on donation money.”

China’s new pop icon, writer, and blogger Han Han wrote on his blog on April 14, “I was aware of the so-called ‘processing fee’ by the Red Cross before the Sichuan earthquake, and the percentage of its processing fee was very high.” He decided he would not donate money to government organizations, partly because of the processing-fee issue and partly because he didn’t know where the donation money would end up. He commented that it was good the Red Cross eventually announced that they would stop charging a processing fee.

“Something still puzzles me to this day,” he writes. “That is, if post-disaster reconstruction needs 100 million and people donate 50 million, does this mean that the total disaster relief fund is now 150 million or does it still remain 100 million, and we have donated 50 million to the government?”

In fact, Han Han is not the only one who is puzzled. According to Grace Li, a former Chinese judge who currently lives in the United States, donation is an act of charity and donating money to the Red Cross is entrusting it to distribute the money.

“As a trustee, a charity organization has the obligation to make public where all the donation money goes. If the government has set rules for charging processing fees, just follow the rules! That applies to normal and average-sized amounts of donation money,” Li said.

Li said, “If the Red Cross charges 3 percent for processing donation money, 3 percent of 40 billion is 1.2 billion yuan (US$175.8 million). Then the Red Cross would be like a robber. In fact, after the Sichuan earthquake, people all over the country were asked to donate money, and it was almost like a mandatory donation. Yet the Red Cross still charged a processing fee. Wasn’t it taking advantage of the situation and robbing people of their money?”

Chinese commentator Wu Longgui said in an article that speculations of a 20 percent processing charge being imposed on donations has spread widely since the 2008 Sichuan earthquake and has had major social repercussions. The main reason that this issue has been raised again and again is that transparency of the charity organizations’ operations and freedom of information are far from meeting the public’s demand to know.

In fact, China’s National Audit Office just recently admitted that there was mishandling of the Sichuan earthquake relief funds. The "Voice of China" program on China National Radio reported on April 20 that as of late February, the National Audit Office had recovered 0.3 billion yuan (US$43.9 million) of misappropriated and misused funds, and reversed the loss of an additional 1.2 billion yuan (US$175.8 million) due to mishandling and mismanagement from the Sichuan earthquake relief funds.

The regime, however, has been trying to silence those who have openly criticized the earthquake relief donation mechanism and processing. A Sichuan government worker who exposed the local government’s embezzlement of relief funds earmarked for the 2008 Sichuan earthquake victims has allegedly been murdered.

Tagyal, a famous Tibetan writer whose pen name is Zhogs Dung, was arrested on April 23 on charges of “sedition to split the country.” His family and friends suspected that his arrest has to do with his publishing a joint letter telling people of embezzlement of earthquake relief funds and urging them to not send their donation money to government-related organizations.

“The public has the right to know how their disaster relief donation is handled, and people will keep asking these questions,” Li concluded.