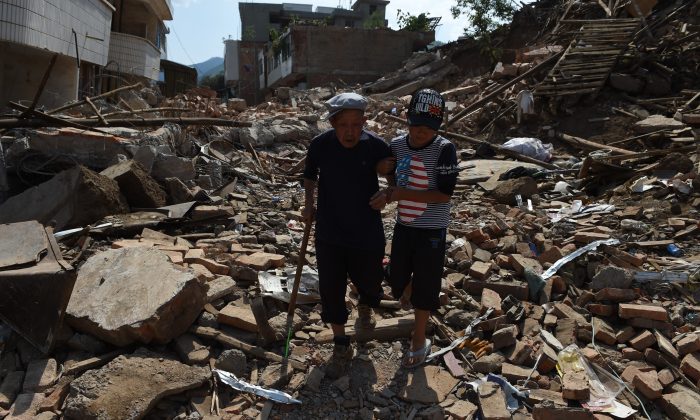 An elderly earthquake survivor is helped by his grandson as they walk through the rubble of collapsed houses at Longtoushan, in Ludian County, Yunnan Province in southwestern China, on Aug. 7, 2014. (Greg Baker/AFP/Getty Images)
Social Issues

Years after local officials failed to properly provide relief to villagers in the aftermath of a devastating earthquake, those villagers have become fed up and recently clashed with police.

In August 2014, a 6.1-magnitude earthquake rocked the area of Ludian County, Yunnan, in the southwestern reaches of China.

Ms. Li, a resident of Ange Village located in Ludian County, told The Epoch Times that on Jan. 24, an elderly villager died during a scuffle with a community official. The elderly woman and her daughter-in-law demanded compensation funds that they said local officials pocketed themselves. During the argument, they began to get physical, and the community official pushed the woman to the ground, she said.

Afterwards, about 2 to 300 fellow villagers gathered on the streets in solidarity. Between 20 and 30 riot police arrived on the scene. When police tried to take the official away in a police car, villagers blockaded the street.

Videos from the scene show villagers throwing rocks at police and destroying police cars. Ms. Li said the two sides were in a deadlock for a long time. The conflict began during the day and lasted until 1 a.m.

On Weibo, China’s equivalent to Twitter, the Ludian County authorities’ official account posted its version of the story: the elderly woman had died from shock after hearing that her daughter-in-law was in a fight with officials. Family of elderly woman then blocked off the street, drawing many spectators.

When an Epoch Times reporter inquired about the clash by phoning the county authorities’ publicity department, they referred to the Weibo statement and told the reporter to contact local police for specifics about any casualties.

Ms. Li said local officials have stalled on building projects meant to restore or replace their destroyed homes. Some have offered compensation fees for building a new home after demolition, but the fees are not nearly enough, she said. “Only 600 yuan (about $95) per square meter for a simple house, cement and steel about 910 yuan (about $144) per square meter—that is not enough to cover the costs. Of course, villagers would not want to move out.”

She also said villagers have not been given welfare payments, while the officials all do. Some villagers’ land has already been forcibly taken, with authorities paying villagers 101 yuan (about $16) per square meter, far below the market rate.

Mr. Luo, a villager from Tangfang Village in the same county, said conflicts between authorities and villagers have occurred frequently since the earthquake. “Yesterday’s was the most serious. In 2015, villagers forced the village Party committee out. Because they were forced out, no one started fighting or got hurt. Back then, it was because village officials gobbled up the earthquake compensation fees,” he said. Those fees included 3,000 yuan (about $474) per household meant to recoup costs for taking care of sheep, but villagers only got 2,000 yuan (about $316) in their hands.