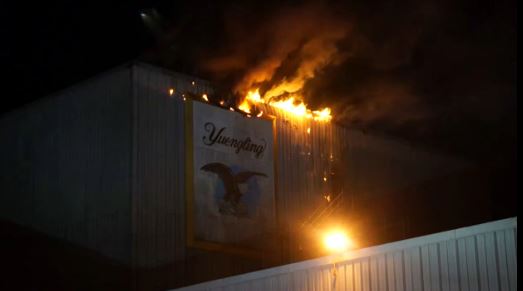 Tamp’s Yuengling Brewery caught on fire on Saturday, prompting a response by firefighters.

The brewery was evacuated as heavy smoke and fire were coming from the building. Someone called in saying the building was “engulfed in flames,” reported the Tampa Bay Tribune.

The two-alarm fire was battled by about 60 firefighters, who had the blaze under control around 9 p.m., about an hour after it was responded to.

Investigators are looking into how the fire started.

There’s no estimate to what kind of damage the fire did.

Yuengling is the oldest brewer in the United States, and is known as distributing out of Pennsylvania.

The second facility, near Busch Gardens in Florida, was opened in 1999.