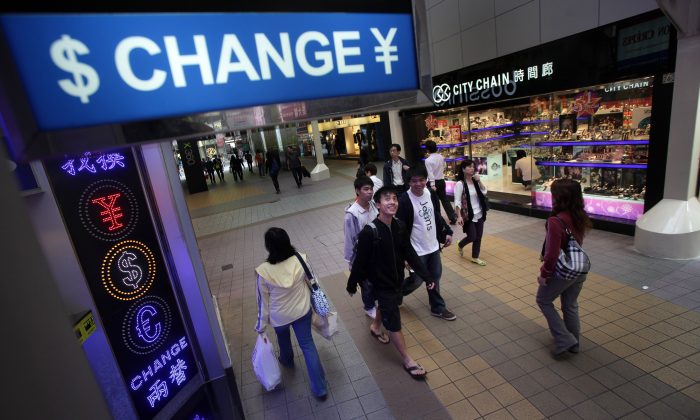 HONG KONG—The exchange rate of Chinese yuan against the U.S. dollar has reached a four-and-a-half month low, affecting the Hong Kong financial market and reflecting an economic slowdown in China.

On Dec. 11, the yuan to U.S. dollar exchange rate closed at 6.1886, a record low since July 22 and a drop of 0.13 percent. The spot rate is dropping continuously, making this round of rate-fall the lowest in nine months.

Analysts believe this may have a connection with recent poor foreign trade data. Companies are more willing to hold U.S. dollars instead of yuan.

The recent unexpected interest rate cut by the People’s Bank of China may be another important reason for yuan devaluation. The interest rate cut reduced yuan’s attraction to international hot money and increased the risk of holding yuan.

The market is worried about a further slowdown of the Chinese economy. Many analysts in China and abroad expect that China’s GDP growth target will be reduced to around 7 percent in 2015, and a further slowdown is around the corner.

The rest of the world is watching closely to see if the central bank will continue to cut interest rates and reserve ratio, or to increase devaluation pressure, accelerating fund outflow.

Although the central bank raised the middle price of yuan for consecutive days, the spot rate slumped successively.

Bloomberg quoted Minsheng Bank foreign exchange dealer Wu Dan, who said the recent devaluation of the spot rate and increase of the middle price indicate that the central bank intends to control the lower limit of devaluation, and it wants to avoid seeing the yuan devalue too much when it is expected to devalue. Now, however, it seems that the lower limit of yuan devaluation is expected to break what was previously expected, according to Wu.

November saw a record high trade surplus of $54.47 billion, 61.4 percent higher than that of last year. The data also shows that funds outflow pressure increased in November, which contributed to yuan devaluation.

The Goldman Sachs Group expects that mainland China may experience a significant trade surplus decline in early 2015, and the exchange rate of the yuan to the U.S. dollar will be exposed to short-term devaluation risk.

On Nov. 21, the People’s Bank unexpectedly announced an interest rate cut for the first time in more than two years.

On Nov. 24, the first trading day after the announcement, the yuan to U.S. dollar rate hit a new low since the end of Sept. 2014. Analysts think the interest rate cut may initiate a cycle of yuan devaluation, and yuan exchange rate fluctuations may increase in the future.

Senior consultant Matthew Garrett of the New Gen Strategies consulting firm said that within the next 12 months, the yuan has a 50 percent chance of experiencing an unprecedented devaluation and volatility. He said its large scale of volatility will have a devastating impact on the global market.

Reuters reported that interest rate cuts reduce the attractiveness of yuan to international hot money and increase the risk of holding yuan.

Kevin Lai, director of Daiwa Capital Markets and deputy director of the Economic Research department, believes that the recent yuan devaluation is mainly driven by yuan selling and money flow away from mainland China.

Lai said the yuan to U.S. dollar rate is expected to be around 6.2 by the end of this year and devalue to 6.6 next year. He explained that as the Federal Reserve’s strategy for winding down its bond-buying program strengthens the U.S. currency, money flows away from the Hong Kong and China markets, and interest rate arbitrage activities began to reverse their positions.

There was a U.S. $82 billion outflow of funds in the third quarter, meaning there was no surplus in the third quarter statement of the international balance of payment, Lai said. He added that a slight deficit is also anticipated in the fourth quarter, and in general, there are net capital outflows.

Therefore, there is downward pressure on the exchange rate, Lai said.

“If yuan appreciation reversed and year-end interest rates hiked, and U.S. dollars began to shrink, then the money would flow away from the mainland. If money flows out of the mainland in the future, it will form a huge outflow of funds, and the yuan will certainly fall,” he said.

In an earlier report, Daiwa Capital said that since the United States launched quantitative easing, there are more than one trillion U.S. dollars flowing into China for arbitrage activities. However, the Federal Reserve announced the end of the bond-buying program, and the market expected the United States to raise the interest rate.

After the dollar became stronger, China’s capital outflows scaled up to 133 billion in the second and third quarters of this year.

Financial analysts in Hong Kong worry that yuan devaluation will dramatically increase the risk to Hong Kong banks as Hong Kong acts as a transit point for mainland capital funds.

Hoping the yuan would appreciate, Hong Kong banks have provided at least one-third of their total loans to mainland China, including many high-risk businesses.

Non-private loans accounted for half of the total loans to the mainland, totaling 1.48 trillion HK dollar (US$191 billion), up 1.9 percent compared to the end of March.

As of the end of June, five Hong Kong banks announced that the average ratio of non-performing loans (NPL) to the mainland is 0.69 percent, much higher than the overall NPL ratio of 0.31 percent. The Standard Chartered Bank Hong Kong subsidiary NPL ratio rose to 0.49 percent, up from 0.43 percent.

A spokesman for Standard Chartered said the increase in NPL was mainly due to suspected cheating on a loan to Qingdao Port.

Kevin Lai said that if the YUAN continues to depreciate, it will be a blow to the Hong Kong banking sector. He said that Hong Kong has taken about US$180 billion from the international market, but at the same time provides US$500 billion in loans to the mainland, including to high-risk companies.

Different mainland companies have borrowed U.S. or Hong Kong dollars from Hong Kong for arbitrage activities, and the profit can be as high as 70 percent. Lai said this is incredible profit.

He said that if the appreciation expectation reversed and began to depreciate, the expected profits would not materialize. If no remedy is made now, there will be huge losses ahead, Lai said.

He said that the most crucial point now is whether Hong Kong’s banking system can withstand this shock.

“Now the Fed is to withdraw, and Hong Kong banks will return U.S. dollars. Whether or not the mainland has the ability to pay back U.S. dollars is a test,” Lai said.

When asked what the riskiest bank in Hong Kong is, Lai merely said that we can guess, and that the banks closer to mainland China are the ones to be careful with.