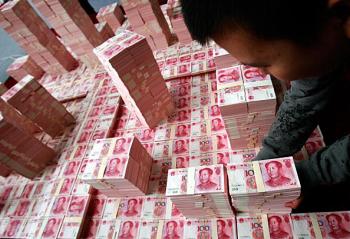 The Impact of Yuan Depreciation on China’s Economy

Li Ping
View profile
Follow
biggersmaller
Print
The People’s Bank of China (PBC) reduced its interest rate significantly on November 26. The value of the yuan against the dollar touched bottom of the permitted range for four consecutive days. Last Monday (December 1) the value of the yuan at one point fell below the 6.81 to 6.85 range, which signified that the anticipation of the depreciation of the yuan among investors was rising.

Frank Gong, chief China economist of JP Morgan Chase, predicted on December 8, "Chinese exporters are still outperforming [other countries]. China should not resort to devaluation and it would be a wrong policy." according to a Reuters report.

The yuan’s exchange rate dropped to 6.85 after the PBC’s rate adjustment. Some experts believe this signified the Chinese economy is worse than expected, but others said that the governor of the PBC, Zhou Xiaochuan, had already said he did not exclude the possibility of depreciating the yuan in order to offset the dramatic fall in exports. The government believes this is an emergency measure that should be taken when international demand drops.

Commentator Caoan Jushi, Vice Chairman and CEO of Pan-America Capital, Inc., believes that by slashing interest rates, Beijing attempted to get people to withdraw their savings to invest in businesses and stimulate the economy. However, solely depending on yuan depreciation to promote exports is not a good policy for the Chinese people or the world.

The one-year forward exchange rate of the dollar against yuan increased from 7.00 to 7.21. Some experts predict it implies the yuan will continue to get weaker and depreciate even further in the future, which means the economic problem is more serious than expected. Others commented reducing both the exchange rate and interest rate, which is a rarely seen measure, signifies Beijing no longer insists on using its past policies to regulate the exchange rate.

Regarding the above, Caoan Jushi said, “Everyone knows the global economy is in crisis. It is especially serious in China despite Beijing not acknowledging it and continues to brag about its roaring economy. We have in fact seen Beijing quickly promise a 4 trillion yuan investment to save the market. Another thing Beijing did was to reduce the interest rate significantly. Looking at it from the overall global situation, foreign investors have already determined that the Chinese economy is not in good condition.”

In Caoan’s view, though the economic downturn in the United States is serious, it is worse in China since the yuan weakened against dollar.

For the Chinese people, appreciation of yuan means thy can buy more with less. However, the inflation in the mainland has wiped out all its benefit, pork prices have increased from 8 yuan per kilo to 28 yuan per kilo, despite the yuan’s appreciation, which has threatened the people’s basic daily needs.

Caoan believes it is natural for Beijing to desire a depreciation of the yuan, it can then push for an increase in exports and thus relieve domestic unemployment pressures because the Chinese economy is heavily dependent on exports. Unfortunately, globally, the devaluation of the yuan worsens the tension that comes from the trade imbalance with the United States as well as global economic crisis.

Increasing exports will not fundamentally improve peoples’ lives. On the contrary, it will consume more natural resources and worsen the already damaged environment. The quality of life deteriorates and the natural resources that belong to future generations are forcibly damaged and consumed. This will eventually have a deadly impact on the continuing development of China’s economy.

Caoan thinks that the United States was in fact hoping China would accept a floating exchange rate when it asked China to adjust the exchange rate. He believes Beijing will not agree to it anytime soon because it involves the issue of political stability.

Changing to floating exchange rate involves changing the current political system in China. First, the regime needs to allow its people to legally hold foreign currency, such as U.S. dollars. Chinese people want to hold U.S. dollars more than yuan. When the majority of people own U.S. dollars and give up the yuan, this in fact shatters the Chinese Communist Party’s legitimacy and destabilizes its political power.