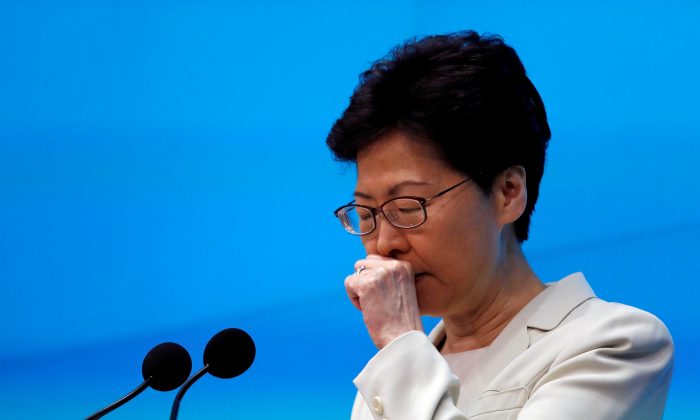 The first time was after she met with the school principals. Lam was said to burst into a muffled cry in the restroom until someone came to console her. She then cried a second time during her meeting with religious leaders.

Her cries revealed her grievances as Beijing’s puppet sandwiched between the Chinese Communist Party (CCP) regime and the Hong Kong people.

It’s widely known that Hong Kong chief executives are actually appointed and led by Beijing although a mock election is held within a committee. Insiders know that the CCP established a Guangdong-Hong Kong-Macao Greater Bay Area leaderboard that serves as de facto leadership of the area. The leaderboard reports directly to China’s State Council, and its leader Han Zheng is a member of the Standing Committee. Other members of the board include Carrie Lam, Macau Chief Executive Fernando Chui, and head of the Liaison Office of the Central People’s Government in the Hong Kong Special Administrative Region. To put it plainly, the Hong Kong Chief Executive is simply the CCP’s agent in Hong Kong, and Lam is Beijing’s puppet.

Although Lam works on the frontlines in the case of the extradition bill, she would not have dared to make such decisions on her own without the CCP’s instructions. Therefore, Lam is just carrying out the CCP’s will.

Why does the CCP wants to change the extradition law? The answer is clear: to tighten its control over Hong Kong’s people. Needless to say, if the bill passes Beijing will be very happy, and Lam will be in favor with her bosses.

But recent developments have proven that the CCP and Lam have underestimated Hong Kong residents’ determination and courage to uphold their freedom. Since the bill was introduced, protests grew more and more heated, and Lam became the focal point of criticism. When Lam ordered the police to open fire at protesters on Jun 12 and labeled the protest as a riot, Hong Kong people demanded Lam to step down. Lam is now sitting on the hot seat.

The CCP has finally realized how serious things are. After Hong Kong police brutally cleared protestors on June 12 Liu Xiaoming, the Chinese ambassador to Britain, told BBC “the central government gave no instruction, no order about making an amendment. This amendment was initiated by the Hong Kong government.” Analysts say that the CCP intends to let Lam shoulder all responsibilities. It’s not hard to imagine how Lam feels now, being deserted after executing all her boss’s orders.

Lam was then scolded by Han Zheng, the aforementioned top leader in charge of Hong Kong. When conflicts intensified, Han traveled to Shenzhen to handle the situation himself. Han met with Lam on Jun 14 and heard Lam’s report on the development. It was said that Lam apologized for her mishandling and promised to take responsibilities and complete her term. Han was said to criticize Lam during the meeting. After their meeting, they decided to postpone the extradition bill.

How must Lam feel about a scolding from her boss after the massive protest by her own people, but still must gather herself enough to continue to serve the CCP?

But that was not the end. On June 15, Lam announced the postponement of the extradition bill shortly after her vow to not resign. She must feel very embarrassed to go back on her own words so quickly.

But Hong Kong residents became further enraged as Lam did not retract the bill, did not apologize, and did not resign. About 2 million people took to the street on June 16 as a response.

Now both the CCP and Lam are panicking. Lam made a public apology on the night of June 16, and begged the Hong Kong people for another chance. Again she put herself in public shame.

However, Lam still did not retract the bill. She also did not respond to calls for resignation, and did not back the “riot” labeling. To add insult to injury, the police did not release arrested protestors, nor did the city’s policy apologize for initiating violence. How can she expect the Hong Kong people to accept her and let her “continue to serve” Hong Kong citizens?

On June 17, Hong Kong citizens started boycotts and strikes, and staged a demonstration outside the Legislative Council and the Chief Executive’s Office. Demonstrators called for conversations with Lam, and demanded a retraction of the extradition bill and the release of arrested students. More and more people are urging Lam to resign. Many believe that the CCP may throw Lam out as a scapegoat any moment to appease the public outrage.

Throughout the whole process of the anti-extradition bill movement, to a certain extent Lam has been the focal point. She has enraged the Hong Kong people by going against the citizens’ will. On the other hand, she has to also bear the blame for the CCP. She’s on the trajectory of the former Chief Executive Tung Chee-hwa who was forced to resign. Given this, an emotional breakdown for Lam is probably inevitable anyway.

But who can she blame? Being a CCP puppet and executing its orders, Lam has been doomed to pay a dear price from the very beginning.