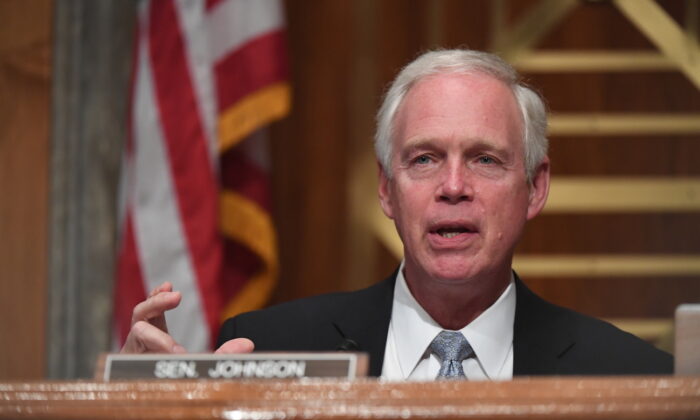 Sen. Ron Johnson (R-Wisc.) was suspended by YouTube and cannot upload videos for seven days, with the Google-owned video-sharing platform accusing him of spreading misinformation about COVID-19 treatments.

“YouTube’s arrogant Covid censorship continues,” he wrote in confirming the development. “How many lives will be lost as a result? How many lives could have been saved with a free exchange of medical ideas? This suppression of speech should concern every American.”

A spokesperson for YouTube told Fox News that one of Johnson’s videos was taken down because it violated its policies and claimed that he was spreading “medical misinformation.”

“We removed the video in accordance with our COVID-19 medical misinformation policies, which don’t allow content that encourages people to use Hydroxychloroquine or Ivermectin to treat or prevent the virus,” the spokesperson said. The Epoch Times has contacted the company for comment.

But by doing so, Johnson said that YouTube’s move to censor him suggests they have “accumulated too much unaccountable power.”

“Big Tech and mainstream media believe they are smarter than medical doctors who have devoted their lives to science and use their skills to save lives,” Johnson said in a statement to news outlets on Friday. “They have decided there is only one medical viewpoint allowed, and it is the viewpoint dictated by government agencies. How many lives will be lost as a result? How many lives could have been saved with a free exchange of medical ideas?”

In the video that was taken down, according to The Federalist, Johnson criticized federal bureaucrats for trying to dissuade the public from taking, or preventing them from knowing about, hydroxychloroquine as a treatment for COVID-19.

“It always baffled me that there was such a concerted effort to deny the American public the type of robust exploration research into early treatment early in this pandemic,” Johnson said, saying that he wanted more focus on the topic and said studies have suggested that “both hydroxychloroquine and ivermectin” are “incredibly safe” drugs.

A recent study from medRxiv found that a combination of hydroxychloroquine, which is prescribed for malaria, and zinc may increase the COVID-19 survival rate by around 200 percent in some cases where a patient has a severe case and requires ventilation.

“We found that when the cumulative doses of two drugs, HCQ and AZM, were above a certain level, patients had a survival rate 2.9 times the other patients,” the study’s conclusion said.

But last year, the U.S. Food and Drug Administration (FDA) issued a warning against using hydroxychloroquine, citing potential side-effects such as “serious heart rhythm problems and other safety issues, including blood and lymph system disorders, kidney injuries, and liver problems and failure.”