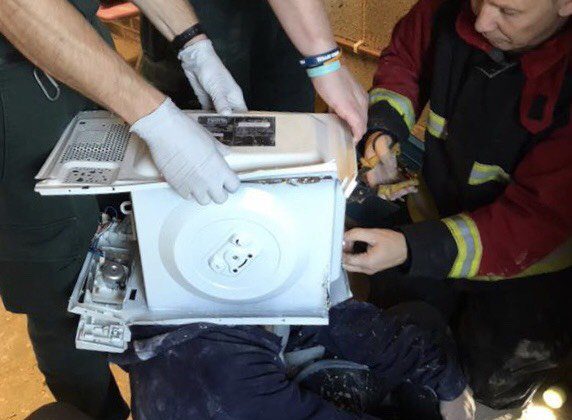 Firefighters spent about an hour freeing a YouTube prankster who cemented his head inside a microwave.

Jay Swingler, 22, and his friends mixed seven bags of Polyfilla and then poured it into a microwave. He then placed his head, that was protected by a plastic bag, inside.

Their plan was to use the microwave as a mold, but the mixture soon set and it became hard for Swingler to breathe through the plastic tube that he was using for air.

His concerned friends attempted to remove the appliance from his head for an hour and a half on Wednesday, Dec. 6 at an address in Wolverhampton, before finally contacting the emergency services.

The operation involved an ambulance crew and the fire service. It took them a further hour, with the help of a specialist technical team, to free the YouTuber.

West Midlands Fire Service tweeted that they were “seriously unimpressed” by the prank.

We're seriously unimpressed ?.
Five of our firefighters were tied up for an hour this afternoon, freeing a YouTube pranker whose head had been 'cemented' inside a microwave oven. Read more: https://t.co/6bZReGuKQX (Photos © West Midlands Fire Service) pic.twitter.com/2ch2UhszeH

Commander Shaun Dakin, the officer in charge of the West Midlands Fire Service explained how removing the appliance from the prankster’s head was not an easy feat, the Metro reported.

“As funny as this sounds, this young man could quite easily have suffocated or have been seriously injured,” he said.

“He was very relieved when we removed a large chunk of the Polyfilla with a screwdriver, allowing him to breathe more easily. But we had to be extremely careful with the screwdriver, working so closely to his head.”

He added, “It took us nearly an hour to free him. All of the group involved were very apologetic, but this was clearly a call-out which might have prevented us from helping someone else in genuine, accidental need.”

Swingler’s YouTube video shows the stunt and includes a thank you message to those who rescued him at the end. It gathered almost 1 million views in one day.

In a video statement released on Twitter, Station commander Simon Woodward gave a stern warning message to Swingler, although he let the YouTuber off the service charge.

“If we are attending incidents that are YouTube videos where we have people who have been irresponsible, those crews are unable to attend those life-risk incidents,” he said.

“The service charge for that would be £650 ($870), but we’re not going to charge, because his life was in danger. What I’d like to do is remind everybody not to put their lives at risk for the sake of other people’s entertainment.”

People on Twitter were also unimpressed, with one person commenting, “I hope you are billing him for the time wasted.”

Do you think this prank went one step too far? Share your thoughts by clicking below.