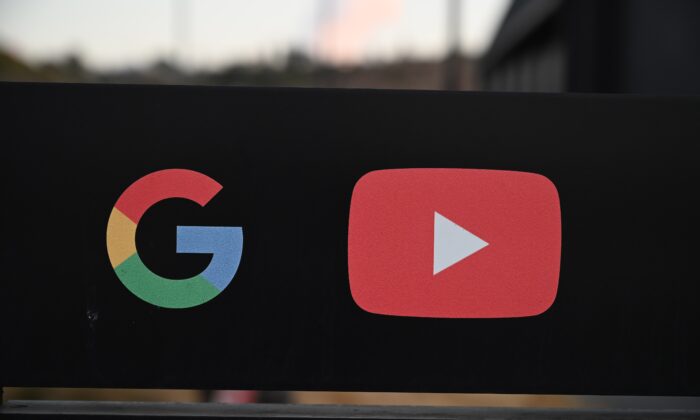 The Google and YouTube logos at the entrance to the Google offices in Los Angeles on Nov. 21, 2019. (Robyn Beck/AFP via Getty Images)
Media & Big Tech

YouTube Announces It Will Hide ‘Dislike’ Counts on All Videos

YouTube has announced that it will hide dislike counts on all its videos, claiming it wants to curb “creator harassment.”

On Nov. 10, the Google-owned company said it will make the metric private after testing it earlier in the year and seeing a decrease in the number of so-called “dislike mobs.”

The like button and count will remain visible, according to YouTube, which posted a screenshot of the new look. The dislike button shows no counts.

“We also heard directly from smaller creators and those just getting started that they are unfairly targeted by this behavior—and our experiment confirmed that this does occur at a higher proportion on smaller channels,” YouTube said in a blog post.

The firm concluded that based on its analysis, it will make “the dislike counts private across YouTube, but the dislike button is not going away,” starting gradually immediately.

Video uploaders “will still be able to find their exact dislike counts in YouTube Studio, along with other existing metrics, if they would like to understand how their content is performing,” the blog post said, adding that it wants to “create an inclusive and respectful environment where creators have the opportunity to succeed and feel safe to express themselves.”

“Viewers can still dislike videos to tune their recommendations and privately share feedback with creators,” it said.

In 2018, YouTube posted the most-disliked video when it uploaded its YouTube Rewind, a recap video. With 221 million views, the video has about 19 million dislikes.

Some commentators on Twitter suggested that YouTube took down the dislikes feature due to White House videos often seeing considerably more dislikes than likes. In April 2021, YouTube deleted about 2.5 million dislikes from several Biden administration videos, according to previous Epoch Times reporting.

The channel has posted more than 300 videos that garnered some 3.7 million dislikes, according to data that was published on the website 81m.org in April. YouTube, at the time, had deleted about 8,000 dislikes per video on average, the data shows.

“We have policies and systems in place to ensure that the engagement on YouTube is authentic, and remove any fraudulent metrics,” a YouTube spokesperson told The Epoch Times via email at the time.

YouTube’s latest announcement, meanwhile, is sure to trigger accusations of censorship to suppress dissenting viewpoints. While YouTube and Google have long been accused of political bias, the firms have said their platforms are designed to be politically neutral.