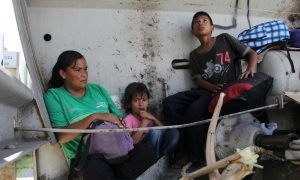 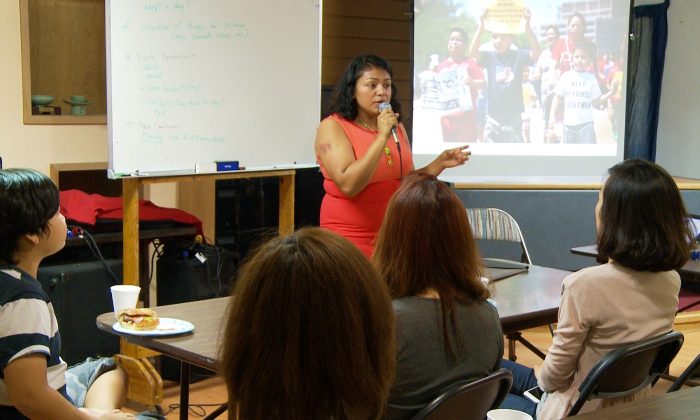 Yamilex Rustrian gives a presentation at the Korean Resource Center in Los Angeles on July 17. She is helping organize a five-day fast called Children Over Politics that began Monday, July 21. (Andrew Li/Epoch Times Staff)
US

LOS ANGELES—Twelve years ago, Yamilex Rustrian’s mother left her family in Guatemala to work in the United States.

“After my mom left, a few months after, my dad was shot eight times,” Rustrian said. “He was shot by gang members.”

Left without a father, Rustrian, at the age of 7, along with her 6-year-old sister, made the treacherous journey north to join their mother.

This year, Rustrian graduated from high school as a recipient of the Deferred Action for Childhood Arrivals (DACA) program, which offers a two-year, renewable reprieve from deportation to some young immigrants. She is now a volunteer at Service Employees International Union’s United Service Workers West (SEIU-USWW) and will be attending California State University–Northridge in the fall.

The protesters argued that illegal immigrants can introduce crime and disease, and that the local Border Patrol station was not equipped for the busloads of immigrants.

The number of unaccompanied children coming to the United States from Central America has skyrocketed, and Rustrian decided she had to do something.

“I believe that I did not die in that desert for a reason,” she said. “I believe that God has a purpose for everybody, and my purpose is to be there for those kids.”

Rustrian is helping organize a five-day fast called Children Over Politics that will begin Monday in Los Angeles at Olvera Street, one of the oldest streets in Los Angeles and what some consider to be the heart of LA’s Latino culture.

She insists this is not only a Latino issue, and she’s recruiting help from many diverse organizations.

On Thursday, she gave a presentation to members of the Korean Resource Center (KRC) to ask for support. Founded in 1983, the center works to empower not only Korean-Americans, but also other low-income and immigrant people.

Dae Joong Yoon, the charismatic executive director of the National Korean American Service and Education Consortium at the KRC, met Rustrian at a Fast for Families campaign in Washington last year. Yoon came to the United States at age 18.

“We have this moral and humanitarian crisis—thousands of children walk miles and miles in the hot desert, and they came here for a better life,” he said. “Now they might go back to their country and face the same poverty and violence, and also being separated from their family who are living in the United States.”

Yoon said these children are coming to the United States with the same hopes and dreams that all of America’s ancestors once had.

“This is an opportunity for us to think about how we should live as human beings and really care about other people who are in need, who are in danger, whose lives are threatened,” he said.

Alejandra Valles, secretary-treasurer and chief of staff at SEIU-USWW, came to the meeting to support Rustrian and her plan.

Valles said many members of the union and their children had formerly fled to the United States from Central America.

Valles said the participants are asking more people to join and donate goods for the immigrant children. Churches or foster homes are expected to provide shelter for the young migrants.

“Get involved, come join us,” she said. “You can fast for a day at the tent, from 9 a.m. to 9 p.m. every day, Monday through Friday. You can come drop off a toy, drop off a jacket, drop off your child’s old shoes that don’t fit them anymore. Anything will make a difference.”

The union will provide medical personnel for the fasting site to make sure the youth and other participants will be safe.

“Let’s treat this issue with humanity and with love and compassion,” Valles said. “That is the spirit of why so many immigrants come to this country.”