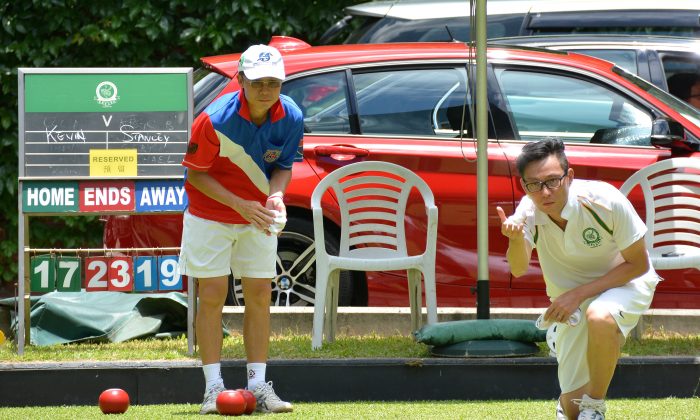 Hong Kong international Stanley Lai (left) is one step closer to repeating his 2011 victory after defeating Kevin Fung from Craigengower Cricket Club in the quarter-finals of the Nong’s National Singles. Lai will play CY Yu from Filipino Club in the semi-finals this Sunday July 6, 2014, at the Finals Day. (Stephanie Worth)
Hong Kong

The new generation of young bowlers are ready to challenge for a number of titles at the first Finals Day of the year, occupying a number of finals spots in the premier competitions this Sunday July 6.

The Finals Day will be held at the Hong Kong Cricket Club and kicks off at 10.00am. It starts with the final of the Novice Pairs, Novice Singles and semi-finals of the National Singles.

The youngsters will start the day dominating the men’s Novice Pairs when both finalists are from the Youth Team. Jason Choi will partner with Arthur Lam to play against Wilson Lau and Ken KK Chan to decide who is better within the team.

Then Choi will partner with three other youngsters to play in the final of the National Fours in the afternoon, against a KBGC team skipped by John Lunn.

The girls from the Youth Team will also be in action in the afternoon, playing in the National Fours final against KBGC. Vivian Yip, who has set the record of being the youngest winner of the National Indoor Singles and Champion of Champions, will look for another piece of silverware for the cupboard.

In the morning match, Fiona Poon and Esther Yu from Shatin Sports Association have another go at the Novice Pairs title, which they lost to Club de Recreio last year. They hope to have better luck against Candy Lam and Finny Li of Golden Bauhinia Lawn Bowls Club this time.

The main focus of the day will be on the National Singles, which was sponsored by Nong’s Company, one of the main suppliers of concentrated Chinese medicine granules in Hong Kong and an unprecedented prize of HK$10,000 (US$1.2) will be awarded to each winner. A record breaking 266 men and 155 women bowlers entered the competition.

In the men’s Semi-finals in the morning, Hong Kong international Raymond Ho and Stanley Lai from Kowloon Bowling Green Club will play Chadwick Chen from Kowloon Cricket Club and CY Yu from Filipino Club respectively. Of the four semi-finalists, only Lai has won the competition before (in 2011).

In the women’s Semi-finals, Mercredi Yeung from KCC will be eager to repeat her success of 2011, but she needs to overcome club-mate Elizabeth Cormack first. The other semi-finals will see Jessie So from Seabird Sports Club playing against Hong Kong Football Club’s Dorothy Yu.

The winners of the semi-finals will play against each other in the afternoon to decide who takes the title, and the price money.