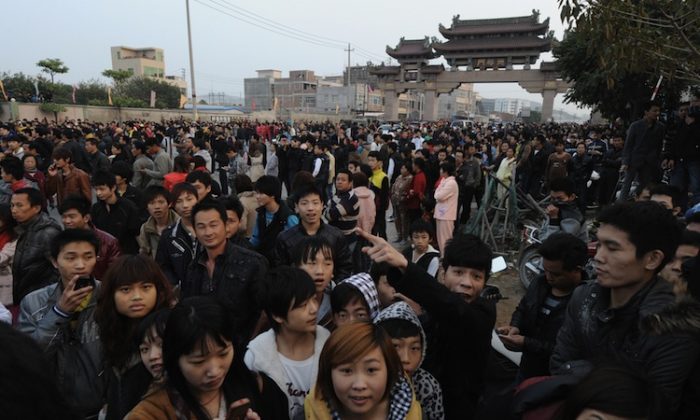 Police block villagers after a large crowd formed at the scene of the environmental protests of the past few days in the town of Haimen, Guangdong Province on December 22. (Mark Ralston/AFP/Getty Images)
China

Just as protests were winding down in Wukan, another standoff between the people and the Chinese Communist Party (CCP) was taking place 80 miles to the east: residents of Guangdong Province’s Haimen Township, in Shantou City, stepped up another round of protests against a proposed coal-fired power plant and its expected environmental pollution. And like in Wukan, energetic young people with a newfound sense of their own rights played an important role.

Tens of thousands of Haimen residents took to the streets from Dec. 20–21, blocking a highway. Riot police were dispatched and violence deployed. Authorities later announced that they would halt the construction of the power plant, but in obvious disbelief, villagers continued to protest.

A rally on Dec. 23 was better organized: under the direction of two young men in their early 20s, Fang and Lin, protesters were prepared. Demonstrators had face masks and mint toothpaste over their noses and mouths, and buckets of water were provided for them to bathe their irritated eyes.

When a round of tear gas was discharged, the crowd would disperse while young demonstrators would quickly scurry to pick up the canisters and throw them into the field, where others were waiting to extinguish them with water.

The crowd had expanded to the tens of thousands by the end of the afternoon.

Young people in their late teens and early twenties were a driving force in the Haimen demonstrations, according to several accounts in Hong Kong and Chinese media. Young people told Oriental Daily, a Hong Kong-based newspaper, that after seeing evidence of pollution in their hometown (there was a coal-fired power plant built there some years ago that polluted the air and water, destroying the local fishery and increasing the rate of cancer), they had to stand up for their own people.

One resident, Mr. Lin, told The Epoch Times that elementary and high school students in the Haimen area participated in the protests, as well as factory workers and others. Many high school students were at the front of the crowd, according to Mr. Mao, who was reached by phone at the scene.

“Many of those youngsters were beaten,” he said. “I am worried that more people will die if things continue to be this way. Two young men died yesterday, a 17-year-old and a 24-year-old,” Mao said. News of two deaths at the hands of police was circulated on Sina Weibo, a popular microblogging service, but is yet to be confirmed.

Two student organizations from Shantou and Chaozhou published a joint letter asking police to stop violence, illegal detention, and torture, and called central authorities to investigate. Oriental Daily speculated that the protest in Haimen could erupt into a student movement across China, though this has yet to be seen.

One of the organizations said they are attempting to break away from a “stiff and rigid system,” to pave the way for civil society in China, and that as the younger generation they are willing to shoulder that responsibility.

Hong Kong media also reported that around a dozen youth were apprehended and secreted away. Ming Pao reported that three were released, but five are still in detention. Thousands continued to rally in front of the Haimen township Party building on Dec. 24–25, demanding the release of protesters in custody.

Over 10 villages in the Chaozhou and Shantou region have begun to initiate Wukan-style initiatives recently, according to Radio Free Asia (RFA). Some are said to be planning large-scale demonstrations.

Huang Qi, founder of Chinese human rights advocacy website 64tianwang.com, told RFA that the Wukan incident is a sign that a new form of peasant movement has begun in China.