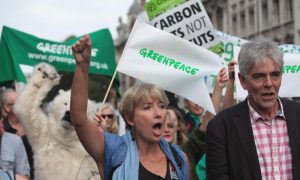 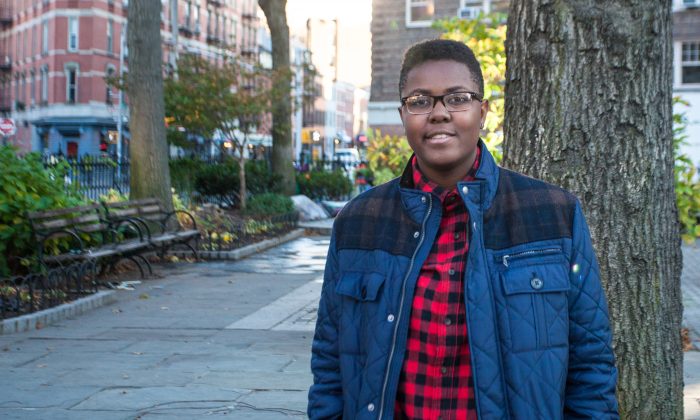 Victoria Barrett, 16, near her high school in Manhattan on Nov. 17, 2015. Barrett is a plaintiff in a climate change lawsuit against the federal government. (Janita Lum/Epoch Times)
New York

NEW YORK—While other 16-year-olds are stressing about their SATs, Victoria Barrett, a high school junior at the Notre Dame School of Manhattan is worrying about how to win her lawsuit against the federal government.

Barrett, a resident of White Plains, New York, is 1 of the 21 youths from across the United States suing the federal government, President Barack Obama, and several federal agencies over the effects of climate change on future generations.

The youth-led lawsuit is invoking panic in the fossil fuel industry. If it succeeds it could open the floodgates for similar environmental actions and cause uncertainty for the industry.

She is currently attending the Conference of Parties 21 (COP 21), being held in Paris between Nov. 30 and Dec. 11, where she will speak at the event Happy Hour with SustainUS and NextGen Climate on Dec. 8.

“My biggest hope right now is probably that at COP21 at the UN Conference on Climate Change, countries come to a definitive legally binding plan on how to lessen the effect of climate change,” Barrett said. “I’m just really hoping that it creates real change and that countries realize what they need to do.”

She asserts that youths would be disproportionately affected by climate change if the federal government does not take action.

“Young people are going to feel the biggest impact of climate change because it’s an issue that as it builds up over time, it’s going to be worse over time,” Barrett said.

Barrett started environmental activism three years ago during her freshman year. Her passion was fueled by her wish to help people living in developing countries like Honduras, which she said is suffering the effects of climate change without understanding why it is occurring.

“My family is actually from Honduras, one of the developing countries most affected by climate change,” Barrett said. “Already we see the rising sea levels … especially at the coastal communities.”

In her early years of activism she joined a variety of organizations and started a high school club to improve recycling at the school and promote the benefits of reusable water bottles.

After three years of hard work, her mentors thought she would be suitable for something more momentous. They suggested she joined a federal lawsuit arranged by the Oregon-based nonprofit, Our Children’s Trust, which she did in August.

The organization has been leading efforts to bring legal action in every state, and is coordinating the lawsuit against the federal government, which it hopes will render a landmark decision.

Barrett also spoke at the United Nations briefing, YOUTH AT THE FOREFRONT Bridging the Gap Between Climate Change and Climate Action, in New York on Nov. 12 emphasizing that youths should have more say on their future.

U.N. Briefing: YOUTH AT THE FOREFRONT Bridging the Gap Between Climate Change and Climate Action. See Barrett’s speech at 41:20.

She said that the lawsuit could make real change as it compels the federal government to confront climate science.

“At first it was really inspiring because I didn’t know I had the power and the ability to sue the federal government,” Barrett said. “This lawsuit is about showing that youths are the ones that are going to be making the change.”

The federal lawsuit, filed in August at the U.S. District Court in Oregon, alleges that the government knowingly contributed to dangerous levels of carbon dioxide emissions in the country. The youths assert that this violates their fundamental rights to life, liberty, and property.

The youths are seeking a court order to require the federal government to implement a national science-based climate recovery program to significantly reduce carbon dioxide emissions to a safe level of 350 ppm by the year 2100.

The complaint states that the government knew since 1965 that carbon dioxide emissions from the combustion of fossil fuels would harm future generations, particularly their generation. But the government continued to permit it anyway.

Professor Michael Gerrard, who teaches environmental law and is also the director of the Sabin Center for Climate Change at Columbia Law School, said a landmark decision would greatly affect the fossil fuel industry.

“It would open up a major new avenue for environmental activists, and create great uncertainty for many segments of the energy industry,” Gerrard said via email.

However, it is too early to tell what the outcome of the claim would be.

“This lawsuit faces an uphill claim,” Gerrard said. “No U.S. court has found a federal constitutional right to a clean environment.”

The federal government has recently responded to the case by attempting to dismiss it. As the youths were waiting for the response, the lawsuit gained important attention.

On Nov. 12, fossil fuel trade associations asked the court for permission to join the lawsuit as a defendant alongside the federal government as they have “significantly protectable interests at stake.”

The associations—American Fuel and Petrochemical Manufacturers, American Petroleum Institute, and National Association of Manufacturers—represent some of the world’s biggest oil companies such as Exxon Mobil, BP, and Shell.

Fossil fuel trade associations asked the court for permission to join the lawsuit as a defendant.

The associations argue in their pleading that reducing fossil fuel emissions would increase production and transportation costs for companies in the fossil fuel industry, decrease their global competitiveness, and drive jobs and businesses abroad.

They add that the youths’ claims do not override the “concrete interests in the production, refining, and use of conventional fuels in the United States, as well as in stable and competitive energy prices.”

Acknowledgment of Right to a Healthy Environment

In addition to the federal suit, the children have participated in lawsuits across various states. A number of these cases have not progressed very far, however, they have not given up hope.

There are currently five pending cases in Oregon, Massachusetts, Colorado, Pennsylvania, and North Carolina, according to Our Children’s Trust Deputy Director Lou Helmuth.

In one of their most recent efforts, a Washington court issued a decision that recognizes the youth’s constitutional right to a healthy environment. Judge Hollis Hill found that the state had a duty required by law to adopt rules establishing air quality standards.

“This obligation must be implemented in a manner that ‘preserves, protect[s], and enhance[s] the air quality for the current and future generations,'” Judge Hill found. “If ever there were a time to recognize through action this right to preservation of a healthful and pleasant atmosphere, the time is now.”

The court case began when the state’s Department of Ecology denied the youth’s petition asking it to establish rules over greenhouse gases emission based on the climate science presented by the youths.

In July 2015, the youths pleaded their case with Democratic Gov. Jay Inslee who then ordered the department to begin the rulemaking. The department followed the governor’s request, but refused to acknowledge the youth’s rights for the preservation of a healthy atmosphere.

The Nov. 19 decision marks a breakthrough in the youth’s pursuit for an acknowledgment of their constitutional rights.

The youth’s attorney, Andrea Rodgers, said in a statement on Nov. 20 that it was an important decision because it clarifies how the department should implement its obligation.

“We will hold Ecology accountable every step of the way to make sure that Judge Hill’s powerful words are put into action,” Rogers said.

Barrett, who aspires to major in international relations in college, said she hopes to get the government to acknowledge the climate science presented in the case.

“I’m really optimistic that once you put the climate science, which [the federal government] can’t deny, right in front of them there’s really no way that they can say that what we are saying isn’t true,” Barrett said.

She also said that a success in the lawsuit would set an example for other youths around the world.